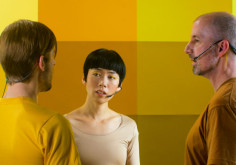 source:.joediebesnet
oyster is a new opera (in progress) about a surprising precursor to last.fm and Pandora. In the 1960’s, renowned American folklorist Alan Lomax developed a wildly ambitious system called cantometrics for coding and analyzing folk songs from every corner of the world. The opera is structured as a public lecture of Alan Lomax’s folk song analysis as demonstrated by four singers, who embody the IBM360 mainframe computer used to correlate his vast amounts of data. Working with the BOTCH vocal ensemble, I am reconstructing the folksong styles from regions as disparate as Bali, West Africa, and Central America using only the data from Lomax’s study. Things like melodic complexity, vocal blend, and nasality, are adjusted by the singers as they circumnavigate the globe. This data vocalization is further mediated by the ensemble’s distinctive extended vocal techniques, and is accompanied by a film narrative that unravels connections between cybernetics, surrealism and ethnography. The film also features a wide range of material drawn from the Alan Lomax archive at The Library of Congress.

oyster is both an opera and a surround sound and image installation by Joe Diebes that traces a surprising musical history of our algorithmically regulated society. In the 1960’s, renowned American folklorist Alan Lomax developed a wildly ambitious system called cantometrics for coding and analyzing folk songs from every corner of the world. Working with the BOTCH vocal ensemble, Diebes will reconstruct the folksong styles from regions as disparate as Bali, West Africa, and Central America using only the data from Lomax’s study. This vocal experiment, further mediated by the ensemble’s distinctive extended vocal techniques, is accompanied by a video narrative that unravels connections between cybernetics, surrealism and ethnography.

Sponsored by Harvestworks with funds from the New York State Council on the Arts Individual Artist Grant for Film, Media, and New Technology Production.

oyster is both an opera and a surround sound and image installation by Joe Diebes that traces a surprising musical history of our algorithmically regulated society. In the 1960’s, renowned American folklorist Alan Lomax developed a wildly ambitious system called cantometrics for coding and analyzing folk songs from every corner of the world. Working with the BOTCH vocal ensemble, Diebes will reconstruct the folksong styles from regions as disparate as Bali, West Africa, and Central America using only the data from Lomax’s study. This vocal experiment, further mediated by the ensemble’s distinctive extended vocal techniques, is accompanied by a video narrative that unravels connections between cybernetics, surrealism and ethnography.

The live opera is structured as a public lecture demonstration of Alan Lomax’s science of cantometrics (the measurement of song). The various parameters of folk song analysis are explained and performed by four singers who embody the IBM360 mainframe computer that Lomax used to correlate his vast amounts of data and cultural profiles. The 37 parameters of Lomax’s system (things like melodic complexity, vocal blend, how nasal the voice is) are adjusted by the singers as they circumnavigate the globe from Arctic Asia to Australia. The inevitable and often absurd gap between the sound of this American experimental vocal ensemble and the actual folk song recordings made in the field is meant to be a productive space within which to consider issues of globalization and a Western, technologically mediated, understanding of other world cultures. Framing the live performance sections will be a large video projection, featuring a wide range of archival and original imagery drawn from the installation.

The installation (exhibited separately from the opera) incorporates projections, multichannel sound and works on paper. The viewer / listener is immersed in a never-­repeating montage of material drawn from the Alan Lomax archive at The Library of Congress. Diebes has already spent substantial time at the archive, and has been given access to use such artifacts as Lomax’s own handwritten journals, shelves and shelves of reel to reel tape recordings, 16mm film footage, and photographs taken on his many expeditions. Material from the archive will be combined with voiceovers and video shot with performers, re-­enacting cross cultural encounters.

Central to the work is its recombinant aspect. Using openframeworks, Diebes will create a state­of-the-­art software engine that creates a continually changing montage in real­time. This ‘brain’ pulls from a carefully tagged database of video footage, still images, text, and sound, juxtaposing them according to algorithms developed by Diebes for their musical and aesthetic potential. By making a narrator out of the computer the work emphasizes a digital perspective which profiles, analyzes, and compartmentalizes its subject.

What might the singing style in folk music from “Arctic Asia” or “Insular Pacific” say about these regions’ respective cultural levels of…sexual repression? Such was one type of question monumental blues and folk music archivist Alan Lomax sought to answer with Cantometrics. Introduced in the mid-1960s, and harnessing some of the earliest computer technologies, Cantometrics was Lomax’s little-known, yet astronomically ambitious and widely dismissed system of numerically coding and analyzing all forms of sung music. In oyster, a humorous and probing new experimental opera from composer and multidisciplinary artist Joe Diebes, the score reverses this process of turning songs into numbers by turning Lomax’s numbers back into songs. (February 20-21, at Roulette, 509 Atlantic Avenue, Brooklyn) The surprising results beg a larger, pervasive contemporary question-how much can we really know of people and culture through computer profiling?

In oyster, over a hypnotic, propulsive instrumental score, Alan Lomax (played by John Rose) gives a speech on his ethnomusicological findings at a 1966 lecture hall. His role is sung-spoken in a rhythmic and catchy style, and is accompanied by a live piano, prepared and retuned to sound like something between a percussion ensemble and a synthesizer. As Rose’s Lomax sing-lectures on the “folk song science” that would culminate in his book, Folk Song Style and Culture, he brings the audience on a “world tour.” This musical globe-trotting, through which Lomax was chasing the grandiose, almost spiritual idea of finding the “song-in-itself,” is evoked in oyster through brightly color-coded videos, in which a vocal ensemble performs a song for each of the nine regions into which Lomax divided the world. These songs, constructed solely from the Cantometric data rather than the original music, capture the losses of translation borne of the technology and Lomax’s very human, “extreme subjectivity of rating procedures,” as one critic of his book would put it.

Meanwhile, a three-person ensemble (Christina Campanella, Michael Chinworth, and Saori Tsukada), pry into and piece together Lomax’s life, parsing and scanning the extensive, recently declassified FBI file on Lomax. (This was compiled over the course of 40 years, as the FBI pursued him among many influential leftists in the midst of the Red Scare.) This ensemble vocally “processes” the file, applying operations such as looping, fragmenting and reversing to the spoken text, creating a collaged and data-distorted vision of something as full, unwieldy, and resistant to classification as a person.

Joe Diebes, who sees the composition of video and words as inseparable from his music, has long been rigorously deconstructing the technologic structures and perceptions through which contemporary lives are led. At once high-concept and sly, his opera projects have bent and expanded the meaning of “opera,” drawing on the theatricality of the form while eschewing operatic vocal traditions-rather using the melodies and rhythms inherent in everyday speech. BOTCH, a collaboration with the same performers who appear in oyster, was his “broken-word” opera whose score followed a digital logic, consisting of if/then statements and operations common to software programs such as cut/paste, sampling and filters, resulting in a richly layered soundscape of pulverized language. Prior to that, the opera WOW (made in collaboration with Christian Hawkey and David Levine) centered on the CD-skipping scandal of the scorned 80s duo Milli Vanilli, with a live-generated score from Diebes that was itself something of an information processing system.

Says Diebes, “Most of the works I’ve done has been a meditation on technology, and its role in society. Now, Pandora and LastFM use algorithms that are designed to analyze music based on parameters and then tell you what you want, just as corporations and the government use big data to profile the population. oyster is like getting at those issues through the back door, through the seemingly innocuous story of a folk music collector more known for archiving Americana… Lomax used early computers to crunch things that aren’t necessary quantifiable, and so he arrived at wild conclusions about how song style indicates deep economic, social and psychological truths. It was often threadbare, like using Google Translate and getting back something that makes no sense.”

Diebes further explains, “What Alan Lomax did was make a 37-item list of all the various song characteristics. Qualities like tempo, volume, regularity, but then interesting ones-nasality, melisma, glottal activity, and even the social organization of the vocal group. These 37 lines were numerically coded and entered into a mainframe computer using old-school punchcards. If you average the results of all the songs from Africa with a computer, you get an average profile, but the average profile doesn’t actually represent any real song; it’s an average of a whole continent, like a virtual song. So that is the score for me. These are data vocalizations that perhaps reveal something about this whole procedure of breaking things down into data and then trying to put it back together again-an encoding/decoding process that’s pretty much how society is becoming organized, from YouTube to Amazon shopping carts.”

The audience of oyster is presented with the odd, at-times comical repercussions of an overdose of ambition. Lomax was a music collecting prodigy; he was already taking recordings of folk songs as a teenager, and archiving them at the Library of Congress in his 20s. Here, he is in his 40s, and is feeling the increasing pressure and drive to be accepted by academia. “He needs to do something big- really large, that’ll put him in world historical significance; those kinds of proportions,” says Diebes. “There is something of a Faustian exchange he makes-his folksy roots for knowledge and power. I was fascinated by the idea that this is someone who has devoted his life to folk song collecting, and now he has this vision of ‘mapping the cosmos’-he compares himself to Dante, Marx, and Freud; that’s the level he’s interested in.”
The audience receives lessons on “world folk music” and “Alan Lomax,” but only as each is filtered through a subjective system. Drawing on the contradictory nature of Lomax as a folksy figure toying with world-changing technologies like the IBM360, and on the fragmented technical biography amassed within the FBI file, oyster voices a prelude to the Information Age, the nascient hints at a culture careening towards the slicker algorithmizing of all facets of life.