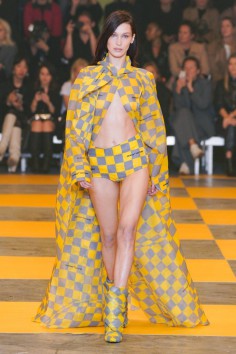 Virgil Abloh’s Fall/Winter 2019 collection featured a number of graphic pieces, including new Off-White™ logos, as well as oversized denim, graffiti-style prints and Gore-Tex pieces. The show — which featured appearances from Offset and Playboi Carti — began with a muted color palette, before a series of eye-catching looks in bright, orange, yellow and green.

The collection itself was notable for its focus on tailoring, with suits and shirting making up a number of the early looks. Key pieces included oversized trousers, slouchy knitwear and half-and-half blazers. Abloh’s signature touches further enhanced the louche looks; bold faux spray-painted prints, tie-dye accents and uncountable branded belts appeared throughout.
.
.
.
.
.
.
.
.
source:businessoffashioncom

American designer, DJ and stylist Virgil Abloh came to prominence as Kanye West ‘s creative director. He has since made waves in the fashion world with his luxury streetwear label, Off-White, culminating in his appointment as artistic director of menswear at Louis Vuitton in March 2018. “This opportunity to think through what the next chapter of design and luxury will mean at a brand that represents the pinnacle of luxury was always a goal in my wildest dreams,” he said of his appointment.

Born in 1980 to Ghanaian parents, Abloh grew up in the outskirts of Chicago. He obtained his bachelor degree in civil engineering from the University of Wisconsin-Madison in 2002 and went on to study architecture at the Illinois Institute of Technology.

After working for an architecture firm for two years, Abloh shifted his focus to fashion. In 2009, he founded RSVP Gallery, an art gallery and menswear boutique in Chicago. That same year, he joined Kanye West’s creative agency Donda as creative director, overseeing projects like stage shows and concert merchandise.

In 2012, Abloh launched his first fashion brand, Pyrex Vision, which screen-printed logos onto Champion t-shirts and dead stock Ralph Lauren rugby shirts. Alongside this, he collaborated with Matthew Williams and Heron Preston as part of a collective called Been Trill.Pyrex shuttered in 2013. That same year, Abloh launched luxury men’s and women’s streetwear label Off-White. The Milan-based brand was picked up by stockists like Barneys and Colette, and is worn by the likes of Jay-Z, ASAP Rocky, Rihanna and Beyoncé. In 2015, Off-White was an LVMH Prize finalist.

Abloh’s first show for Louis Vuitton was held in the gardens of the Palais Royale in Paris in June, on a rainbow-coloured runway with friends in attendance that included rapper Kanye West and musician Kid Cudi. “The Palais Royale on Thursday was unlike any fashion event in recent memory, with its anticipatory outpouring of goodwill. For all its scale, it felt almost like a family affair,” said BoF editor-at-large Tim Blanks in his review.
.
.
.
.
.
.
.
.
source:lilianpaccecombr

Game changer” is an overused phrase, but in the case of Virgil Abloh’s appointment as Louis Vuitton’s artistic director in March 2018, it’s perhaps justified. That’s not just because he’s Vuitton’s first black design lead (one of the first at any heritage fashion house, in fact) or because he has no formal fashion training. (That didn’t stop Raf Simons.) It’s because the streetwear aesthetic, hitherto considered lowly by some, that Abloh has helped propagate through his self-started brands Pyrex Vision and Off-White, not to mention his role as creative director to a certain Kanye West, is now the highest height of fashion.

The Vuitton move has been variously hailed as a historic victory for diversity in the so-white industry or a triumph of hype over substance.

(Show us a brand that is killing it without hype.) Whatever the case, Abloh is now in a uniquely powerful position to change what you wear, even if you’re not one of the fortunate few who can afford to shop at Vuitton: the colours, shapes and pieces – see the wearable bags below, for instance – will ripple outwards and trickle down. And thanks to his cultural connections, plus collaborations with everyone from Ikea to Nike, he can influence at scale – and even redefine what you consider “luxury”.