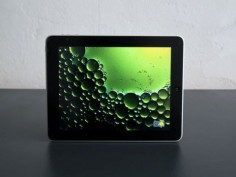 source: evolverfm
Inspired by their joint performance at the FEED soundscape in Berlin, ”The Infinite Music Machine” is an iPad application that brings together the work of sound artists Juju and Jordash with the liquid projections by Paul Skawinski.

The app was developed by the team at the Future Audio Workshop. Besides enjoying the sound and visuals, user can also set the length of time the iPad generated version of the performance, from 1 minute to infinity. All that is left is to zone out and drift away – says Gavin from FAW.

An immersive digital journey into the analog world of Juju & Jordash.