How Deep is Your 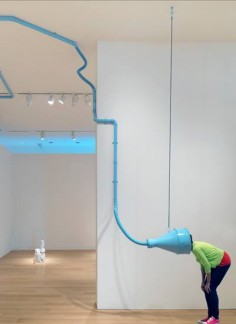 The pathway of blue tubing carries a distant tune through the museum. The sound originates in the utility room, meanders through three floors, and is finally released through the mirrored funnel in the gallery.

Listening leaks along the route of the tube emit bits of layered song. The soundtrack merges two love songs from the Seventies: “Love” 1970, by John Lennon and “How Deep is Your Love” 1979, by the BeeGees.
.
.
.
.
.
.
.
source: decordovaorg

Julianne Swartz is the subject of a survey organized by deCordova Sculpture Park and Museum and the Scottsdale Museum of Contemporary Art (SMoCA). Curated by Rachael Arauz with the full participation of the artist, Julianne Swartz: How Deep Is Your gathers together for the first time a significant group of Swartz’s installations and sculpture that invite viewer participation with elegance, humor, and intelligence.
Acclaimed for her unique blend of high and low-tech materials, Swartz utilizes both existing and self-made technologies, and has often made the ephemeral presence of the viewer fundamental to her work. Her art quietly celebrates contradictions and dichotomies that invite attentive visitors to slow down and sharpen their senses. She employs lenses that transform mundane objects and hidden locations into magical moving pictures, mirrors that disorient a viewer’s spatial perception and self-awareness, vinyl wall drawings that guide viewers to secret architectural spaces, and PVC tubing and speakers that allow buildings to communicate with their inhabitants. Some of her sculptures subversively embrace the appearance of “new media” or “video” only to reveal a hand-made simplicity that prompts viewers to question our culture’s relationship to technology.