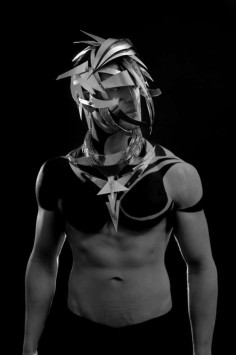 This 2012 editorial from Portuguese designer Valentim Quaresma and photographer Rui Soares Esteves is eye-catching to say the least. In person, the outfits Quaresma adorns his models with might just poke somebody in the eye though.

It is painfully apparent that if one isn’t cutting through the noise in the fashion world, they probably aren’t furthering their career. One needs to be sharp, on point and on the cutting edge to prosper.

The concepts featured here are anything but conventional. They may not be the best thing to wear in a crowded subway (for fear of lawsuits) but on the runway, they will pierce through the competition. Many designers would be grateful just to have a slice of Quaresma’s talent. But they shouldn’t go tearing themselves to shreds just yet; practice makes perfect and looking at this couture, it is apparent their maker has honed his craft to the point of mastery.
.
.
.
.
.
.
.
.
source: saatchionline

Valentim Quaresma lives and works in Lisbon. He studied in Ar.co’s Jewellery Department. In 1994 he wins the competition for Young Creatives in Europe in the plastic arts area and since then he has been working in parallel projects with other artists and designers, presenting his work in different artistic areas like installation and performance.
.
.
.
.
.
.
.
source: maximaxlpt

Valentim Quaresma works and lives in Lisbon, He worked with the fashion designer Ana Salazar over the past 20 years making her jewellery and accessories. Since 2005 he started his own line. He presents his collections during the Lisbon fashion week at ModaLisboa. Valentim Quaresma is named as one of the most recognized jewelery designers in Portugal, In 2008 he won the ” accessories collection of the year ” award on ITS competition in Italy, His work is documented in several fashion magazines all over the world and fashion books.