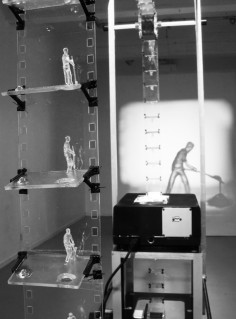 “Film making is a huge privilege; it’s not brain surgery. It’s art, and art is supposed to be an enjoyable process.” ~ Actress Lake Bell

Film making is certainly a type of art form, whether it is through the creation of blockbuster movies, cartoon-like animation, modern 3D animation, or perhaps some other innovative way of capturing a story on film. This art has been around since the 1890s when the first motion-picture camera was invented. These first films remained relatively short (under one minute in length), and didn’t have any sound, until the late 1920s. Since then, we have seen plenty of progress in the quality, length and creativity of cinema. Today we have all types of movies and many different ways of watching them.

For one new media artist, named Julien Maire, film making isn’t about the use of traditional methods, but rather the process of innovating on what has already been done, and making it something completely new. After all, without innovators within this field, progress would never be made.

This summer, Maire had the opportunity to take part in a residency program at iMAL and its FabLab, where they have several 3D printers, laser cutters, and CNC mills to work with.

Maire decided to take the idea of film making to a whole new level, by replacing the traditional film, with 3D printed stereolithographic projections. Maire is known for his uniquely innovative cinema producing methods, which create “films” without the actual “film”. Some of these previously created projections can be found on his Youtube channel, and as you can see, are quite fascinating.

With his latest project, Maire modeled 85 different figures, all in different positions, featuring a man digging a hole. He then used a Form 1 stereolithographic 3D printer from FormLabs to print them out. These tiny little figures were then attached to a film-like reel, and light was passed through them, just like it would be when showing an old-time movie.

The results? A movie like nothing you have seen before. The semi-transparent objects that are printed using FormLab’s clear liquid resin, which is used alongside an ultra violet light to harden the material one layer at a time, until the desired object has been completely “printed”, block out just enough light to make quite the visual presentation.

These 3D printed objects pass through the light projector at just the right speed to trick the human eye into seeing them as part of an animated film. What Maire has done is produce a film which incorporates a method never used before, as far as we can tell. The presentation makes you feel as though you have stepped back in time, but when you learn of the technology used, you realize that this would not have been possible in any decade but the one we currently live in.
.
.
.
.
.
.
.
source: imalorg

Since the mid-1990s, he has worked between categories of performance, media installation and cinema to produce live performative works that were hybrid of genres and media.

His installations and performances have been featured widely and internationally at prestigious venues such as Ars Electronica, Digital Art Festival, European Media Art Festival, Film Festival Rotterdam, Sonar, Transmediale, ZKM and more. Julien was the winner of the NTAA award (Update_2 biennial) in 2008.

Julien uses CNC milling machines, laser cutters and many other high-end technologies for more than 10 years and he will have some time to share his experience with other members of the FabLab.