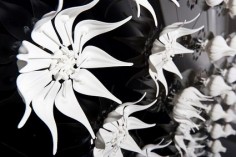 source: vimeo
‘Adaptive Bloom’ by Justin Goodyer of the Bartlett School of Architecture is a reactive facade driven by servos and a computer vision systems. Moving mechanical components were individually produced as single SLS prints at the Bartlett’s Digital Manufacturing Centre. The project evolved through more than 40 physical prototypes in Diploma Unit 23 with tutors Bob Sheil and Emmanuel Vercruyesse in 2008-09, and was later developed as a fully responsive system on the Certificate in Advanced Architectural Research under the tutelage of Ruairi Glynn.
.
.
.
.
.
.
.
source: we-make-money-not-art
One last project i discovered at Constructing Realities, an exhibition that showcases the best work from the Postgraduate Certificate Course in Advanced Architectural Research, at the Bartlett School of Architecture, UCL in London.

Adaptive Bloom, by Justin Goodyer, is a responsive screen speculatively proposed as a stage set for a dance performance in which the screen is the third partner in the choreography, it responds to the dancers and vice-versa. The screen consists of a pixel grid of blooming, mechanical flowers developed through the manufacture of a series of laser sintered prototypes.

The prototype shown in the Constructing Realities exhibition is purely reactive. It gets “bored” if no one has interacted with it for a while, from 10-60 seconds, and performs a random display to entice people and then each flower is triggered if you move in front of it.

The text below describes the role of the screen in a dance performance:

The performance is framed by the lyrics to the song Busby Berkeley Dreams. A heartbroken woman abandoned by her lover dreams of him come back to her each night. In her fantasies, they dance together in kaleidoscopic rhapsodies.

The dance features three performers: one male, one female and the responsive screen. Using ideas taken from William Forsythe‘s work on structured improvisation, each dancer will be given a series of movements, a series of transformations applied to the movements and a series of environmental triggers to activate them.

For example, upon perceiving a left to right movement passing behind him in the screen the male dancer would take the last movement made by the female and mirror it diagonally across his body. Similarly, the screen plays back recorded movements and applies its own transformations.

The system does not create a single performance but a space of possible dances for the artists to explore.
The female is to be dressed in bright red clothing, the male in black and the screen made of white flowers against a black backing. The female will always be clearly visible but the male will appear as a silhouette only when he stands in front of the flowers in an open (more white) state, making his presence transient and ethereal. The goal of the female is to activate the entire grid, turning the backdrop completely white and revealing the male. Conversely the goal of the male is to lower the activity of the screen and disappear into its black background. The resulting performance therefore becomes an unpredictable, oneiric spectacle of undetermined length as the two performers compete to fulfill their goals.

The score will have an aleatoric structure, composed as a series of blocks and triggered by the activation level of the screen. At each successive increment of activation a new block will start playing resulting in cascades and crescendos of sound growing in intensity as the female gets closer to her goal.