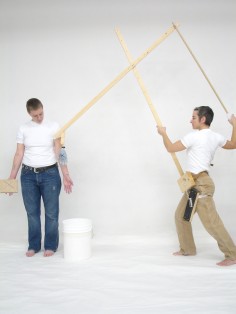 is a group dance/performance project that considers biography, choice, and communication. it uses choreography, handyman arts, and text to explore legacy, what we hand down to one another or lure each other into. it considers how dance and language are taught to us by others yet ways we mark our individuality in the world. it willfully confuses private and public selves, and encourages hiding within others and behind actions. it looks to crude, handmade objects to extend, express and make sense of our bodies, interactions, desires and identities. it dismantles and cobbles back together relationships between people and with oneself; affinities and art; and what it means to be seen, handled, used and needed.

Karen Sherman makes performances, writes, and builds things. Based in Minneapolis by way of New York, her work has been presented nationally by Walker Art Center, Fusebox Festival, PS122, ODC, and many others. She has worked and collaborated with many fine artists, including Sally Silvers, Morgan Thorson, Dan Hurlin, Emily Johnson, Lisa D’Amour, Katie Pearl, Neal Medlyn, NTUSA, The Love Everybody Players, Circus Amok, and the feminist punk pop band, Le Tigre. She received a 2007 Bessie Award for her performance in Thorson’s Faker. She is also a sound and scenic designer, stage electrician, production manager, and fifth-generation lasso spinner.