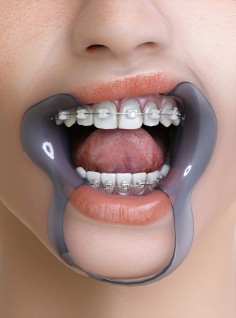 source:creativeboomcom
We’re constantly bombarded with seemingly “perfect” bodies through films, videogames and advertising. But we all know these unrealistic ideals are often nipped and tucked by the latest tech and post-production wizardry.

In a new show at the Hayward Gallery this May, British artist Kate Cooper will present unsettling new works that mimic and critique these kinds of idealised images that dominate today’s visual culture, exploring gender, technology and the politics of labour.

Using the same cutting-edge tools, Cooper’s photo-realistic characters become tired and sick, bleed and bruise. “As harbingers of effect, the liminal bodies become tools with which to unpick contemporary modes of labour and negotiate our own understanding of the effects of capitalism on our physical selves,” she explains.

Among the works included in the exhibition are two recent videos, Infection Drivers (2018) and Symptom Machine (2017). In the former, she presents a naked figure wearing an inflatable bodysuit that expands and recedes, uncomfortably augmenting her gendered body and limiting its freedom of movement. In Symptom Machine, Cooper explores a threatening cinematic tension between the same CG figure and a zombie-like “cypher” – here, human and non-human figures meet, seep blood, and enact a pursuit on a conveyor belt.

As indicated by their titles, Cooper’s works are inspired by the way a virus behaves within the body – tricking its host into assaulting its own immune system. Turning the tropes of commercial image production against themselves, Cooper asserts the bodily nature of her characters, exploring their performative and “material” limits. In doing so, she disrupts our ability to empathise with the images and suggests new possibilities of autonomy and self-care.

Kate Cooper at HENI Project Space, Hayward Gallery will run from 15 May until 23 June 2019. More information can be found at southbankcentre.co.uk.
.
.
.
.
.
.
.
source:outputgallerycom
Artist Kate Cooper presents two recent films at OUTPUT. In ‘We Need Sanctuary’ (2016) and ‘Symptom Machine’ (2017), Cooper offers the body up as a contested space for communication and representation. Using computer-generated imagery, situations and characters are brought together to think through politics of exploitative labour, and the somatic experience of image production and distribution. Both works present, scenes of a Computer-generated bodies; both female and non-human who loom at the very edges of the screen. Their hands touch; they move backwards on a conveyor belt; and blood drips from the girl’s mouth while the non-human sweeps the floor behind her.
.
.
.
.
.
.
.
source:artnowartthencouk
A woman’s body is a site that has been much contested over the last fifty years or so. At the same time it is clear that a lot of women have more power and status than they used to have. It seems a little out of kilter therefor with the current mood to watch the abuses inflicted on the computer generated female figures in this three screen video installation.

The imagery is belligerent. We see a figure writhing in a body suit made of a sort of pearly cling-film. Another figure drags herself along a moving conveyor belt on which a pair of diseased and mottled fingers grope their way towards her.

I am reminded of a mediaeval image created in the aftermath of the Black Death of three blackened cadavers dancing with crowns on their heads. Blood spatters and cells seem to mutate. It is all horrible but also mesmerising. Visitors seemed to find it hard to drag themselves away.

She talks about thinking about the ‘way that images themselves function like viruses, constantly spreading and multiplying. She has also says that in her research she looked at the way in which some viruses and diseases behave, specifically the way that certain types of cancer can occupy hidden spaces within the body – so called ‘sanctuary sites’ – where they can grow without being detected.’

This is powerful stuff which is also highly accomplished. It will certainly stay with you although you may well regret seeing it.

Kate Cooper ‘Symptom Machine’ is at the Hayward Gallery, South Bank until 22 June.