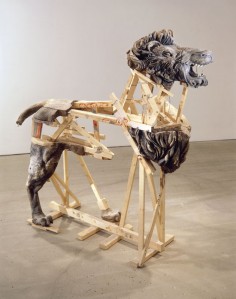 Working with unfired clay, Kristen Morgin can, as if by magic, create facsimiles of objects found in both nature and culture. Whether they are teacups or carousel horses, her works have the patina of great age and are fractured into many pieces. As a result, each work simultaneously memorializes and destroys on impact the object it portrays. Her decayed life-sized objects are realistic in scale and shape, yet they are abstracted through the process of their degradation. Morgin received a BA from California State University, Hayward; an MFA from the Alfred University School of Ceramics in Alfred, New York; and was the Summer Visiting Artist at California State University, Long Beach. She has had solo shows at Marc Selwyn Fine Art, Los Angeles (2006) and Viento y Agua Gallery, Long Beach (2004). Selected group exhibitions includeTrans-Ceramic Art 3rd World Ceramic Biennale, Icheon, Korea, 2005; Thing: New Sculpture from Los Angeles Hammer Museum, Los Angeles (2005); and Because the Earth Is 1/3 Dirt Art Museum of the University of Colorado, Boulder (2004).
.
.
.
.
.
.
source:

Nearly everyone who sees Kristen Morgin’s sculptures has a story to tell about them, and while the stories may be different, their trajectory is often the same: someone recognizes a detail, like the tail fin of a Cadillac or the chiseled mane of a carousel horse, in Morgin’s unwieldy clay monuments, feels her own memories are ensconced in that detail, and begins to speak as though she has been familiar with Morgin’s sculpture for years.

“I’m envious of their nostalgia,” Morgin, who often has no personal history with the once-iconic, now-obsolete objects she sculpts, says of her viewers. “I have a desire to be close to something I’m not even near.” Using unfired clay, supported by wood and wire armatures, Morgin has evoked the nuances and textures of vintage children’s toys, an army of cellos, an old Fiat, and, most recently, a collection of antique books and games. Yet, despite their exquisite detail, Morgin’s sculptures look as though they have been salvaged from the ruins of a wrecked ocean liner and might crumble at any moment. It’s this uncanny tension between careful craft and impending disintegration that makes her approach to ceramics, and sculpture in general, so compelling.

Morgin, who recently left the job she held for nearly a decade as a professor of ceramics at California State University, Long Beach, now focuses solely on art-making. She lives and works in an industrial neighborhood south of Los Angeles and though she has occupied the studio she shares with sculptor Julie Schustack, for only a matter of weeks, it already feels fully lived in. Two of Morgin’s large sculpted clay cars anchor either end of the space and a variety of tools, in-progress projects, and storage crates occupy the room in-between. A symmetrical collection of vintage books and objects lie on the floor at one end of the studio, a few yards away from an improvised kitchen. Among the collected objects is a dated biography of Vivien Leigh, a book about Clifford the Big Red Dog, and a box of Barnum’s Animal Crackers. These original objects lie on the right, perfectly mirrored by clay facsimiles on the left, and it would take more than a cursory glance to distinguish the carefully painted doppelgangers from their real-life counterparts. In fact, the lid of the clay Barnum’s box arcs in such an idiosyncratic way, as though whoever opened it could never close it again, that it seems more convincingly real than the actual cardboard box opposite it. Morgin refers to these sculptures as “honorary monuments.” But unlike most monuments, hers are more vulnerable than the originals.

Morgin’s ceramics career began, more or less, in 1995, when she arrived at New York State College of Ceramics at Alfred University, enrolled in the MFA program. She didn’t entirely know what she had gotten herself into. Rurally located, the town of Alfred offered few distractions (“To give you an idea of how small it is,” she quips, “they have an annual parade to celebrate their one traffic light”) and Morgin was able to squeeze by on a $400-per-month stipend, focusing all of her energy on art-making. At first, she made fired ceramic figures. But she began to feel limited by figuration—she would intend for her sculptures to embody social injustice or loneliness, and still they would end up looking like portraits or caricatures. Advisors encouraged her to develop new skills, and she found herself experimenting with unfired clay, making weathered objects that looked as though they had barely survived clandestine pasts. She would build wood and wire armatures, use glue as a binder, and sometimes add cement for color. The armatures would be exposed in places, and she would let clay dry and clump until it looked as though it had corroded over time.

As Morgin soon discovered, Alfred can be a challenging place for experimentation. “If you weren’t going to fire and glaze, you really had to explain yourself,” she says, and she became quite good at explaining. “Within ceramics, there’s a fear that if you come in and start making work out of unfired clay you’re going to endanger the traditions.” Morgin respected tradition, especially the diligent attention ceramic artists pay to how things are made, but she wanted her work to have a non-traditional effect.

“I wanted my work to be dangerous,” she continues. While fired clay was dependable and archival, air-dried clay required constant maintenance. “Depending on how you cared for something, it could either break down or still exist.” The threat of extinction made the objects more alive.

Advisors warned Morgin that her unwieldy sculptures would be impossible to move and too precarious to sell. The latter didn’t bother her. She liked the idea of keeping what she made, building an ever-growing, museum-like repository. She disproved the former as soon as she graduated. “The first thing I did was build something enormous and delicate and move it to Kansas City,” Morgin recalls. Eventually, she would transport her sculptures overseas as well.

In 2001, after she had moved to Southern California to teach but before her work began receiving national attention, Cuesta College in San Luis Obispo offered Morgin a solo show. This was a particularly dark period for Morgin, who had just experienced the death of a good friend, and the challenge of filling Cuesta’s space, a gaping 2000-square-foot gallery, allowed her to marry some of her melancholia with ambition. She invented a narrative: a composer, trapped in a labor camp, arranged a brilliant symphony. This symphony doubled as a theory that tied together everything in the world and someone managed to smuggle it out of the camp. It remained buried for years until Morgin’s show finally unleashed “the theory of everything” to the world.

Morgin built violins, deer, cars, dinnerware, trumpets, and nine cellos that maintained a quiet elegance despite the fact that each instrument looked slightly more battered than the last. She also included 150 collage pieces, and told the story of the smuggled symphony at the opening. Titled “The Ticking Elephant and Other Surviving Excerpts of the Hope Symphony,” the exhibition turned nostalgia on its head. It wasn’t about reveling in past brilliance; it was a survey of weathered objects bent on staying in the world.

The word nostalgia has been tossed around liberally when it comes to Morgin’s work, and understandably so. Critic Leah Ollman used it in her 2006 Art in America review of Morgin’s first show at Marc Selywn Fine Art and Catherine Taft used it in her 2008 Best-of-L.A. column for Saatchi Online, saying, Morgin’s “objects speak to nostalgia and memory while remaining totally anonymous.” But Morgin’s work is weirdly removed from what nostalgia conventionally means. Hers isn’t a whimsical desire to revisit the happiness of childhood; it’s more complicated than that.

A few years ago, when she still taught at Cal State Long Beach, a colleague who visited Morgin’s studio asked, “Did you know that nostalgia literally means the desire to return home alive?” Morgin didn’t know, but she did further research. Coined by 17th Century doctor Johannes Hofer, the word nostalgia initially described a syndrome experienced by mercenaries so desperate to return home that they often began to lose touch with the present. They fixated on the past for the sake of the future. Morgin’s sculptures work similarly: through their unapologetically battered delicacy, they pull an object-driven idea of craft out of its storied past and push it into the future.

Since the Hope Symphony, Morgin’s work has shown in a number of widely-viewed exhibitions. Her low-rider ’49 Mercury titled Sweet and Low Down, and her arrestingly simple replica of Beethoven’s piano appeared in “The Thing” at The Hammer Museum. An urn, a loving cup, a bottle, several cups, and a carousel animal (a lion) appeared in “Unmonumental” at New York’s New Museum. Her 2008 solo show at Marc Selwyn, “objects for everyone that I have ever known,” revisited childhood mementos and included human-sized sculptures of Mighty Mouse and Popeye.

Meanwhile, those nine cellos that appeared at Cuesta College have been stacked in crates, moving around Southern California with Morgin. Though she gave two of them away as gifts, she intended to keep the remaining seven, even if they were never seen again. “I have a history with them that is kind of like caring for an elderly person,” she says. But when Marc Selwyn asked if he could exhibit the cellos, Morgin consented, with the condition that two not be sold.

“Cellos” opened in December, and the instruments looked completely different than they had in 2001. “They originally came out of extraordinary sorrow,” Morgin reflects, “but they don’t feel that sorrowful anymore.” Arranged systematically, like carefully preserved specimens, they occupy a dimly lit room. Each is numbered—Cello #3 (2001) has a bird buried in its shell—and each looks like it has reached the limits of its disintegration.

Not long into the exhibit, Selwyn called, saying collectors wanted to purchase the cellos, and Morgin eventually agreed to let them go. Now, they have a new role: to continue to exist, as evidence that inevitable decay can be arrested, if only temporarily, by someone who understands that the survival of crafted objects is a metaphor for the survival of culture.