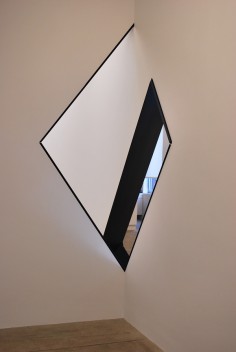 NYC-based artist Sarah Oppenheimer‘s work blurs the line between sculpture and architecture. Her amazing installations usually involve moving walls, slanting floors, and creating apertures—sometimes symmetric, sometimes asymmetric, and often with mirrors—that would mesmerize (and confuse) the most resistant of gallery/museum guests. Much in the way James Turrell or Doug Wheeler can create spatial confusion with light, and Richard Serra can take over a space with his torques, Oppenheimer makes the gallery itself—and the experience of walking through it—the art. All her works are identified by letters and numbers such as D-33 (second photo from top) making them all the more abstract. Each work is meticulously planned with mechanical drawings and engineered load tests, then executed with precision. I can’t wait to see one of these in person.
.
.
.
.
.
.
.
source: artyaleedu
Ms. Oppenheimer is an artist engaged with the boundary conditions of spatial adjacency. She received a B.A. from Brown University in 1995 and an M.F.A. in painting from Yale University in 1999. Upcoming solo projects include 33-D, a double threshold at at Kunsthaus Baselland and a solo exhibition at MassMoCA. Recent projects include W-12302, an architecturally embedded permanent commission at the Baltimore Museum of Art (2012). Her work has been exhibited at venues including the Warhol Museum, Pittsburgh PA (2012), the Museum of Contemporary Art, San Diego (2009), Art Unlimited, Art Basel (2009), Skulpturens Hus (Stockholm), the Saint Louis Art Museum, the Mattress Factory, the Drawing Center and the Sculpture Center. She is the recipient of a Rome Prize Fellowship 2011-12, a Louis Comfort Tiffany Foundation Fellowship 2009, a Guggenheim Foundation Fellowship 2007, an American Academy of Arts and Letters Award in Art 2007, and a Rema Hort Mann Foundation Fellowship 2003. Ms. Oppenheimer joined the Yale faculty in 2003 and was appointed critic in painting/printmaking in 2005.
.
.
.
.
.
.
.
source: grahamfoundationorg
Sarah Oppenheimer received a BA in Semiotics from Brown University in 1995 and a MFA in painting from Yale University in 1999, where she is currently a critic in the School of Art. Her work has been exhibited in Europe and in the United States at venues including the Saint Louis Art Museum, Missouri; the Museum of Contemporary Art, San Diego, California; the Queens Museum of Art, New York; the Mattress Factory, Pittsburgh, Pennsylvania; the Drawing Center, New York; and Skulpturens Hus, Stockholm, Sweden. She is the recipient of numerous awards including the 2010−11 Gilmore D. Clarke/Michael Rapuano Rome Prize, the New York Foundation for the Arts (NYFA) Fellowships in Architecture/Environmental Structures (2010, 2006), the Louis Comfort Tiffany Foundation Fellowship (2009), the American Academy of Arts and Letters Award in Art (2007), and the John Simon Guggenheim Memorial Foundation Fellowship (2007). Sarah Oppenheimer was born in Austin, Texas; she lives in New York.