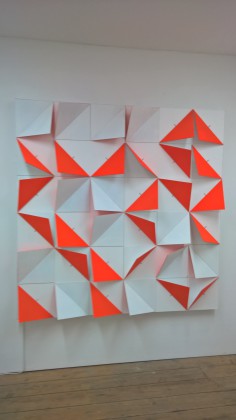 source: thevh5blogspot
The exhibition coincided with Lumiere London 2016 festival in which Lab[au] is featured with their art installation binaryWAVES. The exhibition ran from 13 – 31 January 2016 at the .

The exhibition calculations, permutations, notations with all artworks created by LAb[au], very much like binaryWAVES, employs technology for the most part of the exhibition to animate their work as it plays on the geometry, shape and lighting to create different allusions and added textured layers to the artworks.

The pieces that feature origami has a subtlety to them which is further reinforced with the slender and occasional movements as a flap moves across playing on the surrealistic themes that run throughout the exhibition. More to the this theme is the concept of technology as also appears in print as well in oneOfABillionDays which features a series of alphanumerics that dances and dazzles upon the eye. LAb[au] presents the idea of “algorithmic logic” to challenge the idea of the contemporary vision and appeal.
.
.
.
.
.
.
.
.
source: mayorgallery
LAb[au] is a group of artists, Manuel Abendroth, Jérôme Decock and Els Vermang, located in Brussels.

Their artworks share characteristics with conceptual art, system art and concrete art – though actualised with contemporary materials, techniques and formats. They have a strong tendency towards a reductionist, serial and elementary language, manifested in their use of colour, geometry, light and motion. LAb[au] questions contemporary aesthetics, confronting them with algorithmic logic.

Lumiere London is a free outdoor light festival. Over four evenings the city will be transformed with an extraordinary array of installations, turning the capital into a winter playground. LAb[au]’s installation binaryWaves can be found in Kings Cross, running along Regent’s Canal. Using infrared sensors to capture the invisible flows of information that surround us from mobile phones, radios and cars, binaryWaves transforms them into a unique display of light, sound and colour.
.
.
.
.
.
.
.
source: lab-au

LAb|au| developed a transdisciplinary and collaborative approach based on different artistic, scientific and theoretic methods, examining the transformation of architecture and spatio-temporal structures in accordance to the technological progress within a practice entitled ‘MetaDeSIGN’. Metadesign [ meta = information about information ] displays the theme of space-constructs relative to information processes – architecture as a code. It concerns the transposition of inFORMational processes in n-dimensional form.
Founded in 1997 and based in Brussels, LAb[au] mainly creates interactive artworks, audiovisual performances and scenographies, for which it develops its own software and interfaces. Its four members (Manuel Abendroth, Jerome Decock, Alexandre Plennevaux and Els Vermang) also run since 2003 a digital design gallery, ‘MediaRuimte’, in the centre of Brussels.