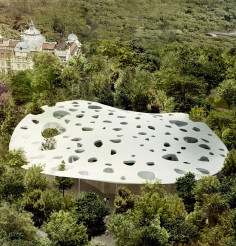 藤本的这次创作试图以纯净的玻璃幕墙作为四面的围护结构，屋顶是一个白色的充满孔洞的大天棚，让人联想到一朵巨大的蘑菇。孔洞会继续想内部的地面下方延伸，为地下的功能房间提供采光的功能。
.
.
.
.
.
.
.
source: archdaily
Sou Fujimoto Architects has been announced as one of three practices chosen to design buildings for the Liget Budapest project, one of Europe’s largest museum developments. Selected through an anonymous competition process, the Japanese firm will realize an undulating House of Hungarian Music that was “inspired by sound waves.” Its distinctive perforated “smart roof” will float on top an airy glass-walled interior illuminated by the canopy’s lightwells.
.
.
.
.
.
.
.
source: designboom
acclaimed japanese architect sou fujimoto has been chosen alongside two other practices to design buildings for a new museum complex in the hungarian capital of budapest. the structure, which will contain the city’s ‘house of hungarian music’, features an undulating and perforated roof, where individual voids bring light into the gallery spaces below. the greenery of the adjacent parkland is continued beneath the shelter of the canopy, allowing visitors to establish a close connection with the surrounding natural environment.

along with sou fujimoto’s ‘house of hungarian music’, two other designs by középülettervező zrt. and vallet de martinis architectes were anonymously chosen for the site’s ‘hungarian museum of architecture and photo museum’ and the ‘museum of ethnography’ respectively.

‘thanks to this design competition, the museums to be built in the city park will create a harmonious dialogue with the park and its built environment, representing outstanding architectural value for budapest and all of hungary, while catering to the collections and the visitors with their 21st-century functional solutions at a world standard,’ said lászló baán, ministerial commissioner for the liget budapest project.

the five buildings to be constructed as part of the $293 million USD project, (£188 million), will be located on the edges of the park, in areas currently covered with concrete or existing structures. according to plans, construction will begin in 2016 with the new museums opening to visitors in march 2018.