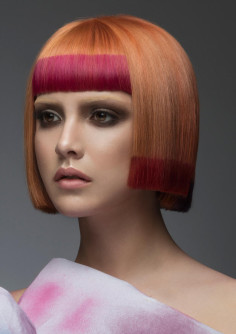 source: outincanberra
Next Hair’s Head Colourist, Leslie Henshaw, has placed as a finalist in two major industry awards for his creative cut and colour work. After competing against some tough national competition, Leslie is the only Canberran to work his way through to the finals in both categories.

Leslie’s collection, ‘Chromatophores’, inspired by the changing cells of animals such of chameleons, impressed the judges for the ACT/NSW Hairdresser of the Year at the Australian Hair Fashion Awards. It also caught the eye of the judges for the 2016 Hot Shots Rising Star (Male).

“Chromatophores are the cells that give some creatures of nature the miraculous ability to change their colour to protect themselves,” says Leslie. “Like chameleons, jellyfish, cuttlefish and frogs they can change from muted tones into brightly coloured and vibrant stripes or patches of colours that are mesmerising. With this collection I imagined what it would be like if humans could perform this amazing feat with their hair.”

Both award applications required Leslie to submit a professional photo shoot of his collection, which took dedicated time and effort.

“I worked with an amazing team of creatives to pull it all together,” says Leslie, “including internationally renowned photographer Robert Coppa, Canberra makeup artist Lesley Johnston and stylist Joseph Galic, as well as some wonderful models.”

Leslie is no stranger to hard work and creativity. In 2015, he participated in no fewer than 40 collaborative photo shoots and, since 2013, his work has been published internationally 96 times. Leslie has also worked on television shows, including X Factor, The Face and The Biggest Loser.

A big believer in giving back to his industry, Leslie continues to teach and participate in national and international education tours, including major Australian centres like Sydney, regional centres like Orange and Griffith, and overseas to Hong Kong and China.