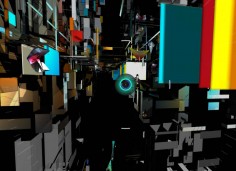 Charting the story of a lost drone drifting through an abstract cityscape, players pilot a virtual craft to explore an infinite urban landscape. Samples from Cale’s original soundscape compositions echo across the landscape as we see the city through the eyes of the drone, buzzing between the buildings, drifting endlessly, in an ambient audio visual choreography.

City of Drones is an interactive digital environment developed by musician John Cale, speculative architect Liam Young and digital artists FIELD. Charting the story of a lost drone drifting through an abstract cityscape, players are invited to pilot a virtual craft and remotely explore this imaginary world. Samples from Cale’s original soundscape compositions echo across the landscape as we see the city through the eyes of the drone, buzzing between the buildings, drifting endlessly, in an ambient audio visual choreography.

The City of Drones digital environment accompanies Loop, 60hz, an immersive live music and drone performance.
John Cale, known for experimenting with different industrial sounds in his practice, once tuned his instruments to the hum of refrigerator motors.

Cale in collaboration with Liam Young now explore the soundscape of a new generation, the distant rumble of drone propellers, to be set against the visual spectacle of Young’s choreographed flying machines. Typically associated with militarised applications, each drone is repurposed here as both disembodied instrument and dynamic audio infrastructure.
.
.
.
.
.
.
.
source: barbicanorguk

About John Cale
“a pioneer who refuses to stop innovating” NME

Over the course of a career that began in the 1960s, John Cale has built up a body of work as a musician, singer, songwriter, producer, film composer and visual artist. Cale has been at the vanguard of a myriad of creative disciplines – the artist who began his musical career in a youth orchestra in Wales and wrote his first composition while still at school developed a penchant for avant-garde at a London art college, and was guided to New York by the hand of Aaron Copland and John Cage. He abandoned conventional wisdom, throwing away his classical scholarship and trading it in to contort his beloved viola into what would become his signature sound. An encounter with LaMonte Young set Cale on a new path, cultivating the then-unfamiliar practice of holding a single chord for hours, creating an inexplicable movement and rhythm that was unique to each listener. All of this set the stage for a hugely influential underground career, progressing from the Velvet Underground’s noise-bending attack on rock and roll through a constantly surprising solo career to the truly unclassifiable music he makes today.

Along the way he has explored feedback, white noise, proto-punk, new wave, ambient, noise-pop, electronic, baroque, alternative, drone, experimental, classical and much else besides. And he has made innovations throughout; whether by tuning his instrument to the hum of a refrigerator, or by tucking paperclips into piano strings to augment a tonal scale, his unwavering pressure on technological boundaries has led him to this exciting new frontier. Now, linking up with an innovator in another field like Liam Young, Cale is embarking on one of the most exciting collaborations to date – combining two seemingly disparate disciplines to explore and extend the link between art and technology like never before.

“Drone : a bleak tapestry of unholy noises, searing into the listeners ears and – with any luck – transporting them to a place they’ll not want to leave for long while.” John Cale

Liam Young is a speculative architect who operates in the spaces between design, fiction and futures. Trained as an architect in Australia, he has worked for a number of the world’s leading design practices. As technology increasingly became the fundamental driver of urban change Young became frustrated with the slow pace of traditional architecture and set up his own speculative futures think tank, Tomorrow’s Thoughts Today, a collaborative practice, working across science, technology and architecture. To ground his design fiction practice in the realities of present Young has also cofounded the research studio Unknown Fields, an award winning nomadic workshop that travels on annual expeditions to the ends of the earth to investigate emerging trends and uncover the weak signals of possible futures.

Young now manages his time between exploring distant landscapes and prototyping the future worlds he extrapolates from them. He tells stories about the future city using fiction, film and performance as imaginative tools to explore the implications and consequences of emerging technologies and ecological conditions. His projects include Under Tomorrow’s Sky, a science fiction movie set for a fictional future city developed through collaborations with scientists and technologists and most notably Electronic Countermeasures, a swarm of quadcopter drones that drift through the city broadcasting a pirate internet and file sharing hub.

In this collaboration with John Cale, Young’s collection of choreographed drones, typically associated with militarised applications, are repurposed as both disembodied instruments and dynamic audio infrastructure. If Cale’s sonic experiments with refrigerator motors talked to the sound of modernisation then – for Young – the distant rumble of soon-to-be-ubiquitous drone technologies suggests a soundscape for a new generation. Young speculates on how we might imagine the implications of these machines beyond the existing dystopian narratives. LOOP>>60Hz suggests the possibility for a radical reimagining of the drone as a cultural object.
.
.
.
.
.
.
.
source: 160grams

It’s with the enthusiasm of a four-years old that I attended John Cale and Liam Young’s Drone Orchestra at the Barbican last Friday. A spectacular climactic finish to Digital Revolution, the concert was held in the intimate, plush-bronze surrounds of the Barbican Theatre. Upon arrival one could not help noticing safety-nets above, below and in front of everyone, a claustrophobic latticework that hinted at the demonized objects that would later join the gig: drones.

Spectators were probably expecting a Ballardian soundscape infected by flying creatures, stuck between the under-belly of the stage, the safety nets and the ceiling. Instead huge efforts were made to humanize the drones: during the ‘ouverture,’ the first creature that we met could have been mistaken for a futuristic Christmas decoration: anarchically draped in LEDs and fabric, it rose like a medusa while John Cale and his band opened the show on cold synth notes. The next drones we met were smaller, clad in clown-like pink-red stripes, piloted so elegantly they seemed to fulfill the role of contemporary dancers. Other decidedly camp creatures followed. The attention given to the ‘costumes’ was extreme; every feather, mirror and piece of fabric fleshing out a bestiary of harlequin-drones, an army of octopuses, medusas, peacocks, doves, in short of sympathetic cyborgs. Hybrids of course, flying in the air but resembling aquatic creatures; dancing on disco rhythms and buzzing hauntingly, hovering over our seats; doubles also, their pilots discernable in the orchestra pit. At many times, I was reminded of the peculiar feeling, at once magical and disquieting, of seeing planes flying over one’s head. Friday’s show seemed to call for a world where flying creatures could go back to the aero-dreams of the late nineteenth-century or the 1910s, the craze for hot-air balloons, heroic pilots and impossible aircrafts, unaffected by today’s (or the after-WW1′s) paranoid imagination. Young and Cale state that ‘there are now more civilian drones in the sky than there are military ones:’ that good inventions are inherently tied to the military circuit is no news. What’s new here is that drones have truly entered the civic sphere, to the point of being used on loop, devoid of their function and utterly aesthetised. Because Liam Young is a ‘speculative architect and storyteller,’ there was an underlying narrative: the idea of ‘fallen’, forgotten drones drifting forever on loop – a concept that beautifully echoed Cale’s self-feedbacks, literally retakes of his most famous tracks interspersed with glitches, buzzes and new lyrics that fit the geo-political context suggested by the use of drones.

For despite the ‘democratization of tech’, the Wall-E treatment given to the drones and the overall fun of the experience, the songs (with titles such as Mercenaries ready for war, Wasteland, Gravel or Sandman) questioned this ‘humane’ digital landscape. Most obviously the lyrics “Afghanistan, Afghanistan, whatever happened to you…:” repeated on loop as the drones were piloted at much higher speed and de-humanized once again. The lighting, which initially seemed to dance with the rock-n-roll numbers and embellish the existentialist ballads, took a much bleaker significance. For the whole show, shafts of vertical light were projected on selected members of the audience. It eventually drifted from immersive to Kafkian: the soft rays of yellow dust disguising searching lights, the romantic lighthouse beacon violent over-lit warscape. Same for the safety net: while it was first gently ornated by purple, blue, yellow projectors forming abstract shapes, its primary functions of barrier and enclosure soon re-emerged. There were plenty of comedic and purely musical moments, however: lounge punk-jazz, the ironic December Rains, and beautiful strings of viola crashing the virtuality of the audio-visual trip.

Meanwhile, as John Cale’s haunting voice resonated in the auditorium, the lyrics became topographical, as if he himself was detached, somewhere in drone’s POV. Of course this is the conclusion of Loop 60hz: City of Drones, also part of Digital Revolution and in collaboration with FIELD, a game-experience that ‘allows players to pilot a virtual craft to explore an infinite urban landscape; the story of a lost drone drifting through an abstract cityscape.’ Reaching the more melancholic depths of sci-fi, the lost drone is, beyond all gimmicks, the true protagonist of both stories. Familiar and alien, it is still beyond our hands, though in this epochal gig, it proved more attainable than ever.
.
.
.
.
.
.
.
source: fieldio

FIELD creates expressive and dynamic artworks for digital platforms: audio-visual installations, experiences for web and mobile, and shareable digital artefacts. We explore Colour, Life, and Infinity through new technology and a research-led approach – hi-tech experiences with a human touch.

Colour is our material and our way to talk to hearts and minds. We are committed to the pursuit of the new, and driven by the contemporary pulse of art, design, fashion and music.

FIELD has created work for galleries, festivals, and public installations in Europe, the US and Asia. The studio led by co-founders Marcus Wendt and Vera-Maria Glahn delivers branded art for a global audience, and generative systems for intelligent design solutions.