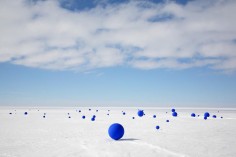 california-based artist lita albuquerque led an expedition to antarctica, near the south pole in the creation of her global installation ‘stellar axis’, a creative enterprise which became the first and largest ephemeral artwork created on the continent. albuquerque and a team of researchers and astronomers situated 99 fabricated blue spheres on the earth’s icy surface, the placement of each corresponding to the location of one specific stars in the sky above. during orbit, the displacement between the original positions of the stars and the vibrantly colored orbs drew an invisible spiral of our planet spinning in motion, creating a terrestrial constellation at the earth’s pole. the dramatic photos documented by jean de pomereu are currently exhibiting for ‘vanishing ice’ at the whatcom museum, washington until march 2nd, 2014.
.
.
.
.
.
.
.
.
source: ipyorg

The Stellar Axis land art project is currently being deployed in Antarctica, to be completed for the Southern hemisphere Summer Solstice on 22 December 2006.

Perhaps the largest and most ambitious arts project to take place in Antarctica, Stellar Axis is the work of the internationally known, Los Angeles based artist, Lita Albuquerque, and is sponsored by the US National Science Foundation and US Antarctic Programme.
The concept is to mirror the southern constellations through the placement of 99 blue spheres on the Ross Ice Shelf in Antarctica.

Albuquerque – a pioneering member of the first generation of Earth artists – executes her works in vast expanses of deserts around the globe. This work will be her largest to date, and is derived from her interest in archaeoastronomy. Envisioned as phase one of a two-part project, it will be completed at the North Pole by symbolizing a shaft of starlight aligned with the rotational axis of Earth.

This ephemeral artwork will be a major extension of her commitment to develop a visual language that addresses the realities of time and space: A modern art version of ancient astronomical sites.
With the guidance of the NSF, the installation will be fulfilling the stringent environmental constraints in Antarctica while highlighting the connections between art, science and mapping.
.
.
.
.
.
.
.
.
source: litaalbuquerque