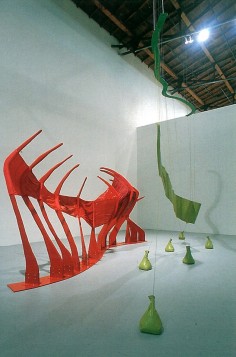 Liz Larner’s work both explores and expands the possibilities of sculpture by combining geometric formalism with notions of movement and change. Her use of lines, color and shape work to modify and reinvent the formal language of Minimalism, producing new relationships between viewer, sculpture and the surrounding environment. Drawing from a wide range of materials and narratives, Larner’s work encourages new experiences of space along with a deeper meditation on the ways in which viewers understand and interact with it.

Born in 1960 in Sacramento, California, Larner current lives in Los Angeles. She received a B.F.A. from California Institute of Arts, Valencia in 1985, and was awarded a Guggenheim Fellowship in 1999. Winner of an Anonymous Was a Woman Award in 2002, the artist also received the Smithsonian American Art Museum’s Lucelia Artist Award in 2002.

Among Larner’s many exhibitions since the late-1980s, her most notable include a permanent sculpture entitled Public Jewel commissioned by the GSA for the plaza of the Byron Rogers Federal Building and U.S. Courthouse in Denver, CO (2014), a site-specific work commissioned by the Public Art Fund at the Doris C. Freedman Plaza in New York City (2006), along with solo presentations at Museum of Contemporary Art, Chicago (2002), Museum of Contemporary Art, Los Angeles, CA (2001), MAK, Austrian Museum of Applied Arts, Vienna, Austria (1998), Kunsthalle Basel in Switzerland (1997).
Her work was included in the 1989 and 2006 Whitney Biennials at the Whitney Museum of American Art in New York, and has also been presented at the Hirshhorn Museum & Sculpture Garden in Washington, D.C., Dallas Museum of Art, the UCLA Hammer Museum in Los Angeles, Smithsonian American Art Museum in Washington, D.C., Institute of Contemporary Art, London, San Francisco Museum of Modern Art, Albright-Knox Art Gallery in Buffalo, New York, and Ballroom Marfa in Texas, among others.

Liz Larner I don’t really want to guide people’s interpretation of the work, but I can let you know what I think about it. The issues around photography at the time I was at Cal Arts in the early ’80s made me want to deal with our world spatially and materially, but not as an architect. Sculpture takes on many of the same problems as architecture, but for different reasons. For me it is a medium that can address how our world is produced and the factors that go into forming it. Because of this I feel there is a potential poetics in sculpture that is closely connected to our world as the context we inhabit.
.
.
.
.
.
.
.
source: artsynet

Liz Larner’s geometric sculptures explore the fundamental qualities of formalist sculpture: volume and mass, line and substance, and the potential of positive and negative space. Her virtuosic works include 2001 (2001), a public installation that fused a cube and a sphere in a massive, glossy form; RWBs (2005), which she presented at the 2006 Whitney Biennial, was a messy tangle of red, white, and blue wires, at once massive and airy. Larner’s best-known early work is her “Culture” series of the late 1980s, for which she placed odds and ends in petri dishes and allowed bacteria to form naturally on and decay the objects.