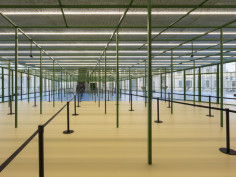 source:fondazionepradaorg
Commissioned by Fondazione Prada for its Milan venue, “Whether Line”, the large-scale multimedia installation, conceived by Lizzie Fitch (USA, 1981) and Ryan Trecartin (USA, 1981), represents the first output of a creative process begun in late 2016, investigating the perpetual promise of “new” terrain and the inherent instability of territorial appropriation.

Taking the idealized rurality endemic to back-to-the-land ideologies as a conceptual starting point, the project represents both a return and an escape. Relocating their studio operations to the countryside of Ohio for this work, Fitch and Trecartin conceived the framework for a new movie as a haunted map: a location with its own will and a constellation of permanent built sets which include a large hobby-barn commissary, a lazy river, and a forest watchtower, occupied by a cast of characters who are simultaneously agents and subjects of the map. The artists contort these sites through dislocations of time and memory to explore the notion of borders and boundaries—existential, psychosocial, and physical.

Conceived for the Podium, the Deposito and the external courtyard of Fondazione Prada’s Milan complex, the show is staged as an immersive intervention where visitors navigate constructions suggesting both agency and containment, an active state of limbo. Aural and visual echoes of nature and daily life will merge with distortions of familiar spaces such as amusement parks, homesteads, and fortifications, extending the digital and narrative content of the movie. Fitch and Trecartin’s new work probes the desire to escape and the pervasiveness of systems and techniques that bind us together. The exhibition is completed with a movie retrospective to be screened at Fondazione Prada’s Cinema.

The project is accompanied by a book published by Fondazione Prada focusing on Fitch and Trecartin’s expansive collaborative practice which began in 2000.
.
.
.
.
.
.
.
source:moussemagazineit
For their new exhibition Whether Line at Fondazione Prada, Milan, Lizzie Fitch and Ryan Trecartin present another of their uncanny “sculptural theaters,” a through route based on the movie set they built on the property near Athens, Ohio, where they moved in 2016 and where they have apparently settled down. This time they investigate an unmediated process of community bonding, based on the conflictive relationships they have established with their new neighbors—an advanced stage of their peculiar exploration of the schizophrenic effects of prosumer technologies and the internet.

In the beginning it was Providence, where Lizzie Fitch and Ryan Trecartin lived in the early 2000s as students at the Rhode Island School of Design. Then came New Orleans, Philadelphia, Miami, and Los Angeles, each selected as a temporary base for one of their peculiar movie projects, which are developed out of experiments in cohabitation with a community of co-conspirators. Perhaps in an attempt to reconnect with their homeland and families, perhaps moved by a desire to settle down, Fitch and Trecartin have decided to stop their whirlwind journey throughout the United States, at least for a while. They bought land in Ohio, where they grew up, specifically an area near Athens. With the support of Fondazione Prada, in 2016 they started building a movie set as two grown-up children, unprepared to face adulthood, would build a tree house to escape from reality—near the two homes where they live with their respective partners.

Bound by a long friendship that, over the years, has turned into a solid artistic partnership, Fitch and Trecartin wanted to make a set that, unlike the previous ones (which were destroyed after filming) would be permanent: the ultimate incarnation of that blurring of life and art that makes their productions so fascinating. Their choice to move to the Ohio countryside is motivated less by emotion than by an affinity with the back-to-the-land movement. A transhistorical phenomenon whose goal of self-sufficiency is based on growing food on a small-holding, the movement assumed the contours of an exodus in the United States in the late 1960s, when communities of hippies and dreamers left cities to embrace a lifestyle in communion with nature, in the countryside or the desert, epitomized by the construction of visionary, sustainable structures such as geodesic domes.

Depictions, speculations, and proper foundations of similar utopian lands and “imagi-nations” also recur in art history, with a significant comeback in contemporary practice. However, whereas for most artists these represent areas, geographic or virtual, freed by some sort of constriction, Fitch and Trecartin’s promised land has turned into a dystopian reality infested by the ghosts of Western civilization. What is at stake are the processes of community bonding, both internal (that is, the artists and their cohort) and with outsiders (namely, the actual neighbors, with whom the group has reportedly established a conflictive relationship). This is why the set looks more like a concentration camp than a paradise on Earth: a panoptical environment, self-contained within a forest, topped with a watchtower and developed around a massive swimming pool and a Frankenstein building made of elements of prefab houses, which the artists call respectively “the lazy river” and “the barn.”

The plot is based on a loose script, partly improvised and infiltrated by real-life elements. Mixing references and codes from fairy tales, commercial cinema, reality TV shows, and American history in the popular imagination, the movie tells of the vicissitudes occurring between a group of “queer people,” as the artists refer to them, and a wicked Amish neighbor girl—performed by Trecartin—joined by a group of clones. As spectators we are used to the artists’ representation of queerness as an alien type of nature, mostly via a carnivalesque abuse of makeup and costumes. What really strikes us is the way Amish culture—peaceful and based on simple living, farming, and the shunning of technology—is overturned into an incubator of frustration, alienation, and grudges against outsiders. The 2014 horror movie The Devil’s Hand, the story of a Satanic prophecy involving five Amish girls, comes to mind, as does The Blair Witch Project (1999), an early model of prosumer culture that is an ongoing source of inspiration for Fitch and Trecartin.

Along with pop culture, visual arts are a reference. Think of Henry Darger’s early twentieth-century illustrated saga of the Vivian Girls, a paradigmatic example of outsider art, which tells the story of seven girls from the imaginary nation of Abbieannia who rescue enslaved children. Their innocent and unapologetic behavior is echoed in Fitch and Trecartin’s Amish girl, who, in her blue church dress with white apron, incinerates a Christmas tree with a flamethrower. Another possible reference is Paul McCarthy and Mike Kelley’s project Heidi (1992), which addressed the eponymous children’s novel from a psychosexual angle, through a film and an installation of its prefabricated set and props. Similarly, Fitch and Trecartin’s exhibition Whether Line (2019), at Fondazione Prada, Milan, is an uncanny replica of the Athens set interspersed with clips of the movie, another of the artists’ “sculptural theaters” eliciting a reflection on how (social) media fantasies affect our increasingly precodified lifestyle and surroundings.

Lizzie Fitch (b. 1981 Bloomington, Indiana. Lives and works in Athens, Ohio) and Ryan Trecartin (b. 1981 in Webster, Texas. Lives and works in Athens, Ohio) have been working together since they met at Rhode Island School of Design, Providence, in 2000. Since then, their collaborative work has been included in exhibitions at major institutions around the world, including: the Whitney Museum of American Art, New York, 2006; MoMA PS1, New York, 2011; the Musée d’Art Moderne de la Ville de Paris, 2011-2012; the Venice Biennale, 2013; KW Institute for Contemporary Art, Berlin, 2014-2015; and Astrup Fearnley Museet, Oslo, 2018.

Francesco Spampinato is a contemporary art and visual culture historian and writer, senior assistant professor at the University of Bologna. He holds degrees from the University of Bologna; Columbia University; and Sorbonne Nouvelle. From 2011 to 2015 he was adjunct professor at Rhode Island School of Design, Providence. In 2015 he authored the books Come Together: The Rise of Cooperative Art and Design (New York: Princeton Architectural Press) and Can You Hear Me? Music Labels by Visual Artists (Eindhoven: Onomatopee), and in 2017 Art Record Covers (Cologne: TASCHEN).
.
.
.
.
.
.
.
source:vernissagetv
Whether Line” is a large-scale multimedia installation conceived by Lizzie Fitch (USA, 1981) and Ryan Trecartin (USA, 1981) that was commissioned by Fondazione Prada for its Milan venue. The artwork has been conceived for the Podium, the Deposito and the external courtyard of Fondazione Prada’s Milan complex and is staged as an immersive installation. The exhibition is complemented by a movie retrospective that is screened at Fondazione Prada’s Cinema. The show runs until August 5, 2019.
.
.
.
.
.
.
.
source:monopolmagazinde
Ihre Kunst ist nervös, schnell, hyperaktiv – doch jetzt sind Ryan Trecartin und Lizzie Fitch ins Grüne gezogen. In neuen Filmen erzählt das Künstlerduo vom neuen Landleben mit all seinen Widrigkeiten