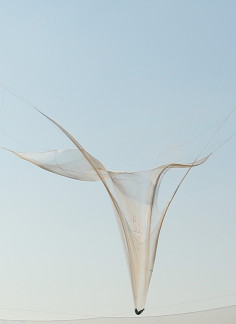 source:createdigitalorgau
In 2016, skydiver Luke Aikins made history by jumping 7600 m without a parachute. John Cruikshank, the civil engineer who designed the systems that made this amazing feat possible, offers some unique insights.
On 30 July 2016, veteran American skydiver Luke Aikins made history by being the first person to jump 7600 m without a parachute. As he took his gigantic leap of faith, a crowd of anxious spectators craned their necks in the Californian desert in anticipation of his emergence from the clouds. Among them were Aikins’ wife, Monica, his four-year-old son, Logan, and a rather nervous civil engineer, John Cruikshank, who helped design the audacious stunt.

Cruikshank’s involvement in this monumental event is a long way from the roads and sewage systems he designs as president and CEO of California-based JMC2 Civil Engineering and Surveying.

His foray into extreme engineering started in April 2014 with a phone call from long-time friend Chris Tally, the psychologist who dreamt up what most people would describe as a crazy idea.

“When Chris asked me if I would do the engineering and oversee the project, I thought about it and said, ‘Sure, let’s do it’,” Cruikshank said.

“Most engineers are not risk takers. We add bits and pieces to make things better but I love the idea of taking something that just seems like it can’t be done and breaking it down and simplifying it to prove that it’s possible.”

Caught in a trap
Aikin’s two-and-a-half-minute freefall – at a speed of around 190 km/h – ended with a soft landing, thanks to the 30 by 30 m net structure designed by Cruikshank, which was dubbed the ‘Fly Trap’. Suspended approximately 20-storeys high by four 61 m cranes, it was crafted from Dyneema, a fibre made from Ultra High Molecular Weight Polyethylene, which is typically used in the fishing industry to catch tuna.

Devising the soft landing was crucial to the stunt’s success, but Cruikshank explains the Fly Trap was in fact Plan B. His original idea was to catch Aikin’s fall in a 305 m slide built on the side of a large natural structure, such as the Grand Canyon. However, the estimated construction cost of US$4.3 million exceeded the project budget.

Plan B saw Cruikshank and his project team discussing high-wire nets with the riggers on a lavish Cirque de Soleil stage production in Las Vegas.

“Performers were falling into a Dyneema net over and over again during the show,” he said.

“We were able to go backstage afterwards and talk to the rigging people and take a look at the net. It has no knots and it’s very light, so when you hit it there is a light impact on your body. There’s also a lot of mesh in there, so you’re able to spread the energy out quite a bit.”

Cushioning the fall
Once Cruikshank had found his net, he needed to calculate the physics of the fall.

historic skydive
John Cruikshank.
“We started doing some math and thinking about how fast Luke would be falling in terminal velocity,” he said.

With the physics in place, Cruikshank sent a sample of the net to Aikins who rigged it up in the backyard of his home in Washington. He then practiced falling into it from short distances to gauge how his body responded.

Meanwhile, Cruikshank and his team worked on the deceleration system. Discussions with Hollywood stunt experts enabled him to narrow his options to either bungee cords or air pistons. The problem with bungee cords was that while they would slow Aikins down, how could they stop him being thrown back up in the air upon landing?

Air pistons proved a more practical option. They are commonly used in Hollywood stunts and Aikins was familiar with them through his stunt work on films such as Iron Man 3 and Godzilla. In this instance, they would be stationed near the cranes and connected to the Fly Trap via ropes and pulleys.

Hitting the target
The project involved approximately eight months of testing. The deceleration was first assessed via a quarter-scale model of the air pistons and net and a 30 m crane was used to drop sand-bag dummies into the centre.

“We were measuring the G-force impact and the results we were getting by the second day were very good,” said Cruikshank, who used Bentley Microstation to create 3D renderings and prepare final construction documents.

The first full-scale test involved roping off a 30 m x 30 m square on the ground with a GPS unit in the middle. A helicopter pilot then practiced dropping dumbbells from various heights into the 8.5 m x 8.5 m ‘sweet spot’ in the centre of the square.

“When the pilot was over the centre of the target, he’d hear a beep in his ear so he knew he was directly above it, then it was a matter of figuring out which way the wind was blowing so he could move over slightly so the weight would drop in the centre of the square,” Cruikshank said.

Not all tests went to plan. Cruikshank describes one instance when construction mesh was used prior to the arrival of the US$42,500 Dyneema net. A test dummy, weighing the same as Aikins and bearing the surface area as his back, crashed straight through the mesh because the tension had not been released prior to the dummy’s landing.

“Think about catching an egg in your hand,” said Cruikshank.

“Your hand needs to be moving with the egg a bit so there’s not too much of an impact. We had a guy on the ground watching the net and the weight as it fell and he’d hit a button to release the tension in the net so it would start dropping a little bit right before the weight hit it. In this case, the button guy didn’t release it in time and we were also using a weaker net. Luke’s wife and son were there watching and it was kind of crazy.”

Change of plans
After more than 18 months of preparation, Aikins’ historic skydive almost didn’t happen. The Screen Actor’s Guild intervened in the final weeks by insisting he wear a parachute for the stunt as a precaution.

“They came to our site and were asking questions and said that they were not going to sanction the event because it was too unsafe without a parachute,” Cruikshank said.

Luke Aikins historic skydive
Luke Aikins takes one last look (and perhaps ponders his own mortality) before leaping out of the plane sans parachute.
“Luke said he wasn’t going to do the jump if he had to wear one.”

Aikins had not trained for the stunt wearing a parachute. Cruikshank and his team were also uncertain of how such a hard object on his back would affect Aikins’ impact when he landed in the net.

As the Cessna Grand Caravan airplane ascended with Aikins onboard, negotiations on the ground continued and the Guild decided to lift their restriction.

“No one had informed Luke about this, but he’d already taken his parachute off,” said Cruikshank.

“He was going to jump anyhow.”

Aikins’ determination stemmed from his confidence in the science that made the stunt possible. During a pre-jump interview, Fox Sports reporter Jenny Taft said some people would describe him as crazy for the stunt.

“What would you say to those people?” she asked him.

“I would say pay attention to the science and the math behind this, and we’ll show you what’s possible,” Aikins responded.

Ready for the fall
To help Aikins hit the Fly Trap’s sweet spot, a GPS was placed in his helmet and an intricate system of visual approach slope indicator (VASI) lights, which are commonly used along airport runways, was placed around the centre square.

Robert Libeau from the Australian Parachute Federation said landing on a target from a standard jump height of just under 4000 m requires a great deal of physical skill.

“If Aikins was off target, he would have been able to reposition himself by deflecting the wind,” he said.

“This involves straightening your legs during the freefall to produce a forward momentum.”

Libeau said Aikins had a lot to consider during his plummet.

“He had to deflect wind, he had to remove his oxygen and he had to make sure he flipped onto his back before he landed,” he said.

This final position was crucial and Aikins underwent extensive training with gymnasts to practice landing on his back in a net.

If he’d landed on his front, adds Cruikshank, Aikins would have “folded like a taco and been broken in half”. Cruikshank describes watching these last moments of the fall as being both terrifying and exhilarating.

“Luke had done 18,000 jumps but he’d never stepped out of a plane without a parachute,” he said.

“I felt good that if he hit the net, things would probably be ok but I was just worried about him missing it. I have goosebumps just thinking about it. I was just so happy for him and for everyone involved. For me, there was a huge sense of accomplishment.”
.
.
.
.
.
.
.
source:redbullstratoscom
A professional skydiver with two decades of experience and more than 16,000 jumps to his credit, Luke Aikins has a lifelong history of tackling aviation challenges that are out of the ordinary. He’s one of the few people with the background and body awareness to envision, fabricate and safely resolve the most precarious situations that Felix Baumgartner could encounter on his descent. Whether he’s suggesting a new parachute configuration, innovating drogue deployment or determining optimal flight postures, Luke is the test subject for the mission team, willingly throwing himself into worst-case scenarios. He also works one-on-one with Felix during intensive airborne training sessions.

Born to a skydiving dynasty, Luke is on staff at Washington’s Kapowsin Air Sports, and he has contributed to the family legacy with three world records. He’s an expert at the precision skydiving discipline of swooping; he’s one of the pioneers of combining a canopy with skis to fly vertically down mountain sides; and he’s an adept BASE jumper and airplane pilot. All of that experience comes into play in Luke’s role as a member of the Red Bull Air Force, an elite team of skydivers, BASE jumpers and paraglider pilots who explore and advocate the possibilities of human flight.

Luke shares his knowledge as an instructor and coach, working with jumpers ranging from U.S. Navy Seals to NASCAR driver Brian Vickers. Further, he is one of the designated Safety and Training Advisors for the United States Parachute Association – collaborating with manufacturers, USPA officials, and the world’s top parachute pilots to develop and advocate training techniques, procedures and regulations intended to advance skydiving safety. Luke is also an expert aerial photographer, with work published in newspapers and magazines worldwide. Luke’s advice has resulted in revisions to the chest pack and parachute setups for the Red Bull Stratos mission, and he has played a leading role in designing the drogue chute’s attachment and deployment.

Luke made his first solo skydive at age 16 and eventually added BASE jumping to his repertoire. A veteran contender in the Pro Swooping Tour, Luke also notched a win at the Red Bull Blade Raid in 2008; a radical event that combines flying a canopy with running skis for 60-mile-per-hour descents around mountain obstacles. Since that victory, he has devoted much of his time to progression of research and development of equipment and flying techniques. From proposing and developing new parachute deployment mechanisms to personally participating in test jumps at 28,000 feet, Luke has been a go-to consultant for researchers, as his work in the Red Bull Stratos project proves.

Luke also teaches at all levels; he has coached NASCAR’s Brian Vickers and regularly instructs the military on cutting-edge skydiving techniques. He is also an expert aerial photographer and has had his pictures published in major newspapers and magazines worldwide.