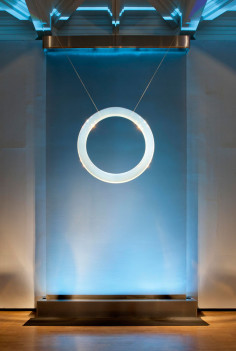 source: vogue
A sixth ring has been added to the Olympic Games, this time in the form of a site-specific installation from Japanese contemporary artist Mariko Mori. A collaboration between the Rio 2016 cultural program and Mori’s Faou Foundation, this is the artist’s latest project in her goal of installing a large public artwork on each inhabited continent. She has already installed Sun Pillar in a remote bay in Okinawa Prefecture, Japan.

Ring: One With Nature is a giant, luminous acrylic ring—made from the same acrylic as Sun Pillar—10 feet in diameter and weighing two tons without the supports, installed atop the 58-meter-tall Véu da Noiva (“Bride’s Veil”) waterfall, which is located about two hours outside of Rio. The ring will change color from blue to gold depending on the time of day, and during the winter solstice, it will align with the sun.

“Seven years ago I had a dream, and the vision was a golden ring on top of a waterfall,” Mori told Vogue.com. The actual execution of the project was on a much shorter timetable. Mori began inspecting waterfalls in 2014, visiting roughly 30 before landing on a specific one, but due to behind-the-scenes installation issues, she had to find a last-minute replacement waterfall just five months ago. “When I got the news, I was in London, so I actually found the waterfall we ended up using via Google Images. Of course, I visited the site, but that was how I originally found it,” Mori explains.

Difficult as the logistics were, once a location was confirmed, the real work began. “There were so many engineers used to create the cantilever that holds up the ring,” Mori said. “Topographical, environmental, hydrological, and mechanical engineers. But because we developed this project since 2014 and had to change the location in March, time was still the biggest challenge.” The ring is held up by a massive cantilever, and it’s designed to last more than 1,000 years.

Mori has lived in New York since 1992. She studied art in the Whitney Museum of American Art’s Independent Study Program, and her work has been acquired by the Museum of Modern Art, the Guggenheim Museum, and the Centre Pompidou in Paris. The ring project is one of the works sponsored by Celebra, the cultural program of the Rio Olympic Games. At the games, Mori also ran the Olympic torch before the opening ceremony last Friday.

Over the last decade, Mori’s practice has gradually shifted in focus. Moving away from the urban realm, she has started exploring the connections between the human and other worlds in increasingly universal ways. Rebirth is the considerable synthesis of her expanded artistic attention and her first solo show in Australia.
.
.
.
.
.
.
.
source: skny