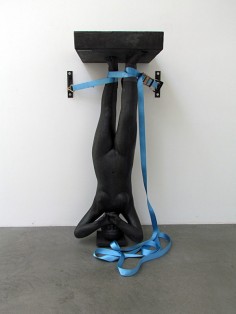 ‘I am a spokesperson for totally anarchistic mayhem on a bed of traditional family values,’ Matias Faldbakken has said. This paradoxical quality – trying to be at once a rebel and a successful artist in one of the richest countries in the world – definitely reveals itself in his installations.

Like his fellow countryman, Gardar Eide Einarsson, who in the past has staged a play written by the Unabomber, the Norwegian artist is interested in the margins and boundaries of civil society: terrorism, vandalism, extreme subcultures, but also in the homogenization of culture by the patronizing absorption of diversity. As a visual artist as well as a successful writer, Faldbakken targets the art world as the ultimate example of a leveling tolerance that incorporates any act of dissent. In spite of his background as a graffiti artist and skateboarder, Faldbakken is not interested in street-art aesthetics, deeming it a despicable form of public decoration. Rather, he’s inspired by minimal and conceptual art of the 1960s and ’70s, with its deconstructive focus on the object and the gallery space.

Faldbakken’s solo show at Museum Boijmans van Beuningen is an example of the paradoxical nature of his institutional criticism. The exhibition presents a selection of pieces from his ‘Container’ series, which range from empty gas cans to abandoned garbage bags. The exhibition’s pivotal piece is Untitled / Locker Sculpture #2 (2011), which comprises a set of grey sheet-metal lockers, bound and squeezed into a useless deformity by two colourful industrial straps. The evidence of material violence in the resulting object – the stretching and crumpling – is what makes the installation work as a sculpture. Before visiting the Boijmans exhibition I had come across the piece at a group show in Amsterdam, but seeing it in the middle of a corridor in the museum made a very different impression. First of all, the location of the art work in a transitional space through which people walk on their way to other exhibitions in the museum makes the work less theatrical than it would be in a traditional white cube setting, and the arrangement of the other pieces on show further contributes to this anti-aural effect.

The other works in the show are exhibited behind glass walls, in four separate small rooms that remain inaccessible to the visitor: a pile of chrome-painted film reel canisters (Film Cans, 2006), a print showing two superimposed images of the back of a DVD cover (Double Cover Xerox 5, 2008), a couple minimal canvas (Canvas #37, 2011) in the background. Untitled / Garbage Bag #21 (2010), partly displayed hanging on a glass and partly abandoned on the floor, is the only other piece the visitor is able to touch.

With a Duchampian gesture, Faldbakken turns the container into content by bringing it to the functionless suspension of the art space. On this particular occasion, though, the casual relationship established with the audience is not the intimidating, quasi-religious experience of aesthetic contemplation that the artist intends to criticize. While the vitrine effect is indeed a reminder of the exclusivity of art as the ultimate luxury good, the proximity of the toilets – just around the corner – and the continuous foot-traffic definitely breaks the tension. Given that the art works are all drawn from a single private collection, it is understandable that they are not all equally strong works, but – as a provocation against the ever-forgiving inclusion of the white cube ideology – maybe picking the least pristine spot in the museum was not the best choice. Or, considering Faldbakken’s penchant for negation, maybe it was.
.
.
.
.
.
.
.
source: paulacoopergallery

Matias Faldbakken’s work, a combination of iconophilia and iconophobia, is primarily concerned with the various tensions between proposition and cancellation, aggression and retreat, and language and its abstraction into illegibility or absurdity. A frequent characteristic of his work is the use of materials derived from the shipping or construction industries, essential supports of trade and commerce, which he powerfully reintroduces into aesthetic discourse. Untitled (Ladder Pull) consists entirely of freight, construction, and mechanical elements that have been jammed, bent, or pulled with applied force. The work expands on a visual language drawn from ideas of transport and exchange, weight and balance, interstitial spaces, and anti-monuments. Intertwined in the ceiling’s trestles, a series of three ladders are bent downwards, teetering precariously with suspended ratchet straps tied to concrete traffic barriers. Described by the artist as “halfway monumental,” the room-scaled sculpture generates an upward, kite-like thrust at the same time as it exudes a deflationary sensibility. In Faldbakken’s words: “I try to suck the air out of the room or de-sacralize it a bit. Fascination should always be balanced with a twist of disappointment.”

An interest in the intricacies of articulation and representation extends to Faldbakken’s newsprints. Working from the notion of the newspaper as an ephemeral and increasingly obsolete medium, Faldbakken interrogates the boundary between the precious, quasi-sacred quality of the art object and the disposable yet nostalgic nature of the newspaper. The works also speak to the ideas of circulation at play in Faldbakken’s “container works”—cans, jugs, lockers, sacks, bags, and other generic vessels for storage and transport that potentially contain goods of some sort. Finally, a framed composition of flattened packing boxes, which evolved out of an encounter with a Joseph Beuys work consisting of a framed olive oil box, further extends the themes of flow, exchange, and value that connect the other works in the exhibition.