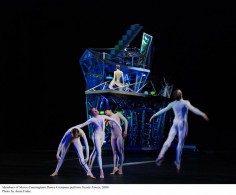 source: mercecunninghamorg
In celebration of Cunningham’s 90th birthday, Nearly Ninety premiered at the Brooklyn Academy of Music on April 16, 2009. Consisting mostly of solos, duets and trios, Alistair Macaulay of the New York Times described the choreography for Nearly Ninety as, “one of Mr. Cunningham’s most poetic cornucopias.” Much of the choreography focuses on human interaction and independence, as two dancers often meet without facing each other, challenging the traditional duet. The music was composed and performed by John Paul Jones, Takehisa Kosugi and Sonic Youth. Italian architect Benedetta Tagliabue designed the décor–a metallic structure standing at twenty-two feet, which was illuminated in bright colors, with videos by Franc Aleu projected onto it.
.
.
.
.
.
.
.
source: modelabnet

Scenery for Merce Cunningham Dance Company for a play based on John Berger’s novel. Directed by Isabel Coixet.
Project by EMBT.

The scenography is a mobile structure which allows four different vantage points that frame the four movements, into which the choreography is divided. Several platforms, on different levels, house the musicians who are playing live: the group Sonic Youth, the Led Zeppelin guitarist, John Paul Jones; and the Japanese musician Takehisa Kosugi; one of these platforms also serves as the stage for one of the ballerinas.

The structure, constructed by the metal forger Esteve Miret in steel, is partially covered with a skin made from a semitransparent and iridescent cloth material which reflects light. The scenography also has projections from the videoartist Frank Aleu, who usually collaborates with La Fura dels Baus. They give this structure a solid appearance, its volume resembling a “rock”. And the fact is that the original idea came from a small piece, resembling a glass mountain, which reflected light and divided it into colours. From that full description object, Benedetta Tagliabue designed a volumetric structure which would also reflect those colours and that light through this semitransparent “skin”.

“The challenge was twice as difficult: on the one hand, because there had only been two previous projects in the field of scenography (a collaboration with La Fura dels Baus for their DQ show, premiering at the Liceu Opera House in 2000, and our own scenography that we designed to inaugurate the studio); and on the other, because Cunningham works in a way which is completely improvised, free, innovative and not restricted to pre-established methods and, therefore, there was no set idea about how to develop the project”. And if that wasn’t enough, Cunningham’s previous scenographers had been artists and designers of the stature of Robert Rauschenberg, Jasper Johns and Andy Warhol…”
.
.
.
.
.
.
.
source: mercecunninghamorg

An active choreographer and mentor to the arts world until his death at the age of 90, Cunningham earned some of the highest honors bestowed in the arts. Among his many awards are the National Medal of Arts (1990) and the MacArthur Fellowship (1985). He also received the Jacob’s Pillow Dance Award in 2009, Japan’s Praemium Imperiale in 2005, the British Laurence Olivier Award in 1985, and was named Officier of the Legion d’Honneur in France in 2004. Cunningham’s life and artistic vision have been the subject of four books and three major exhibitions, and his works have been presented by groups including the Ballet of the Paris Opéra, New York City Ballet, American Ballet Theater, White Oak Dance Project, and London’s Rambert Dance Company. Cunningham passed away in his New York City home on July 26, 2009. Always forward-thinking, Cunningham developed the precedent-setting Legacy Plan prior to his death, to guide his Company and ensure the preservation of his artistic legacy.
.
.
.
.
.
.
.
source: cotidianulro