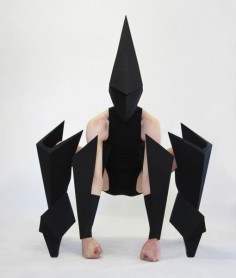 Designed in Hackney: we’re stepping into the fashion world for Designed in Hackney this week, showcasing fashion designers who are based in the borough every day. We start with Gareth Pugh’s sculptural designs for new ballet Carbon Life, which had its premier at the Royal Opera House last month.

With choreography by Wayne McGregor and music by producer Mark Ronson, the ballet is a modern fusion of pop, dance and fashion, with Pugh’s graphic designs distorting the body into architectural forms.

Known for his dark and theatrical creations, Pugh found success through east-London design initiative Fashion East not long after graduating from Central Saint Martins in 2003. He now has a studio in Dalston.

Photography is by Bill Cooper, courtesy of ROH.