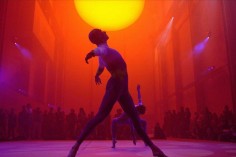 source: harlequinfloors
The Merce Cunningham performances, the final events of Dance Umbrella’s 25th Anniversary season and co-incidentally in MCDC’s 50th year, took place in the vast, 152 meter long Turbine Hall of the Tate Modern within the embracing environment of Olafur Eliasson’s The Weather Project. Cunningham’s company of fifteen dancers performed on three Harlequin Liberty dance areas, linked by a Harlequin Studio dance surface, permitting the artistes to move from one area to another and for the audience to promenade and view the performance from different vantage points. Eliasson’s Weather installation included a 15 meter diameter artificial sun powered by 240 low pressure sodium street lights, interacting with mirrors and stage fog effects to create a surreal monochromatic setting for the performances.

The choice of Harlequin Liberty floors was in little doubt as MCDC’s Bethune Street studio in New York has also recently been equipped with a permanent installation. But, what clinched the specification of the portable Liberty panels was the ability to lay the floor areas at express speed each evening after the gallery closed to the day visitors. To assist in this process Harlequin’s new storage carts enabled the floor to be rapidly dissembled after each night’s performance, then wheeled away for secure storage. Cunningham has achieved a global reputation for modern dance choreographed and improvised for unconventional venues. Thanks to Harlequin Liberty, without compromising quality, performers are able to dance on the same flooring on tour as they enjoy in the best equipped studios. The technical team, comprising Simon Byford of Dance Umbrella with Trevor Carlson and Will Knapp of MCDC, worked closely with Harlequin’s Monica Arnott to plan, supply and deliver the complete package to a demanding schedule.
.
.
.
.
.
.
.
source: theguardian
Then Merce Cunningham first agreed to stage a series of dance Events in the Turbine Hall, he knew he’d be competing with an awesome space. What he didn’t know was the effect that Olafur Eliasson’s recently installed Weather Project would have on the venue.

Eliasson’s cosmic sorcery of lights and mirrors not only seems to double the scale of the hall, but inspires everyone present to feel as if they’re walking blindly off the planet into the setting sun.

But the point about Cunningham Events is that each performance is uniquely tailored to the venue where it’s staged. So his first and obvious strategy for animating this vaulting emptiness is to make his audience a part of the show.

The hall is divided into three performing areas, around which the public is free to roam. For the first 10 minutes there is no dancing, only the sound of Takehisa Kosugi and Christian Wolff’s music spooling jagged chords from far away systems.

The crowd becomes so intent on watching its collective reflection in the high mirrored ceiling, that the speed with which the 15 dancers appear causes a riffle of panic.

As the performers peel on to the separate dance areas no one knows whether to focus on the woman dancing the quiet solo in front of them or to go chasing after the flurry of activity at the other end of the hall.

But the constant genius of Cunningham’s work is its ability to move into large mysteries. As the music changes to a dense abrasive riff, a trio of dancers becomes silhouetted against Eliasson’s giant yellow sun. Their tightly angled jumps acquire an apocalyptic ferocity, as if they were a dying species hurling defiance against extinction. A change of lighting, accompanied by the sound of gamelans, and a sculpted quartet takes on a gilded, ritual solemnity.

The extreme architecture of the Event works its own magic. At one moment you can be looking down the hall and watching the piece unfold in magnificent vistas. Then you can switch focus and see some of the world’s most perfectly finessed dancers performing just inches away.

The pleasure of making sense of this Event feels like an intensely secret one – until you see the experience reflected on the faces of everyone around.
.
.
.
.
.
.
.
source: mercecunninghamorg

An active choreographer and mentor to the arts world until his death at the age of 90, Cunningham earned some of the highest honors bestowed in the arts. Among his many awards are the National Medal of Arts (1990) and the MacArthur Fellowship (1985). He also received the Jacob’s Pillow Dance Award in 2009, Japan’s Praemium Imperiale in 2005, the British Laurence Olivier Award in 1985, and was named Officier of the Legion d’Honneur in France in 2004. Cunningham’s life and artistic vision have been the subject of four books and three major exhibitions, and his works have been presented by groups including the Ballet of the Paris Opéra, New York City Ballet, American Ballet Theater, White Oak Dance Project, and London’s Rambert Dance Company. Cunningham passed away in his New York City home on July 26, 2009. Always forward-thinking, Cunningham developed the precedent-setting Legacy Plan prior to his death, to guide his Company and ensure the preservation of his artistic legacy.