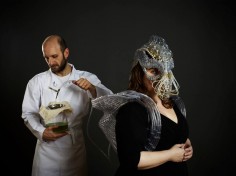 Artists Michael Burton and Michiko Nikita came up with an interesting concept for how humans could evolve past our modern concept of food. Their solution? The symbiotic algae suit. The concept is… people would wear tubes in which algae grows, and the algae subsists on carbon dioxide from the wearer, as well as the sun’s light. Photosynthetic organisms are studied by scientists, so the concept isn’t too far off. Would you be interested in wearing the algae suit setup? Kim Horcher and Tim Frisch discuss the idea the art project presents.
.
.
.
.
.
.
.
source: dvice

When we think of futuristic fashion, our minds often lean toward the minimalist designs of Star Trek or Tron. But maybe what we wear in the future will have more to do with what we eat than what we want to look like.

That’s the premise behind the algaculture symbiosis suit designed by Michael Burton and Michiko Nitta. The symbiosis suit is designed to make food for you as you go about your daily routine. A number of tubes, placed in front of your mouth, harness the CO2 you breathe and feed it to an ever-growing population of algae which lives in the suit. Stepping outside or sitting near a window provides the algae all the sun it requires.

Of course, the growing of algae isn’t the end-game here — it’s growing enough to eat three square meals a day of the stuff. The suit debuted at a recent event at the Victoria and Albert Museum in London. There, an opera singer donned the algaculture symbiosis suit and serenaded the gathered crowd. The suit created new algae populations during her performance, which audience members were free to consume after the presentation.