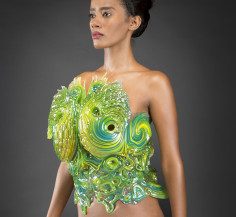 This 3D Printed Wearable Capillaries “The Wanderers” were unveiled as part of the exhibition: ‘The Sixth Element: Exploring the Natural Beauty of 3D Printing’ on display at EuroMold, 25-28 November, Frankfurt, Germany, Hall 11, Booth FN01. This work was done by Neri Oxman and a group of creatives from the MIT mediated matter group in collaboration with Christoph Bader and Dominik Kolb. Each piece intends to hold life sustaining elements contained within 3D printed vascular structures with internal cavities. Influenced by natural growth behaviour, the computational process creates shapes that adapt to their environment and is capable of producing a wide variety of living structures. Starting as seeds, the biomimicry process simulates growth by continuously expanding and refining its shape. Living matter within these structures will ultimately transform oxygen for breathing, photons for seeing, biomass for eating, biofuels for moving and calcium for building. Scientific collaborators include Dr. James Weaver, Prof. George Church, Prof. Pamela Silver, Prof. Tim Lu, Allen Chen, Stephanie Hays, Eléonore Tham and Dan Robertson.

The collection of bio-material 3D prints explore the possibility of ‘voyaging to the worlds beyond by visiting the worlds within.’ The wearable capillaries have been conceived for ‘interplanetary pilgrims’, which are infused with synthetically engineered microorganisms to make the hostile habitable and the deadly alive.
.
.
.
.
.
.
.
source: besttopicsnet

Neri Oxman is an architect, professor, and designer with an impressive CV. She directs the Mediated Matter design research group at MIT Media Lab, where her group researches and applies knowledge in various fields to comprehensive product and architectural design. She has won a fairly staggering amount of awards for her work and has exhibited her works in museums across the world. She has works in the permanent collections of New York City’s MOMA and Paris’ Centre Georges Pompidou Museum, as well as having exhibited in other museums and private collections around the world. At MIT, she even designed her own research area , coining the phrase “Material Ecology” to describe it.

This impressive figure has now teamed up with an impressive figure in the 3D printing world. Oxman and her team utilized Stratasys’ 3D printing technology to bring their latest designs to life — and they’ve just been unveiled at EuroMold, which is running November 25-28. Stratasys’ “The Sixth Element: Exploring the Natural Beauty of 3D Printing” collection is on display this week in Frankfurt. EuroMold Visitors can see four “wearable skins” based on stellar inspiration at Hall 11, Booth FN01.

Oxman’s project itself is titled “Wanderers: An Astrobiological Exploration,” and is a collaboration between members of her Mediated Matter team and Christoph Bader and Dominik Kolb of deskriptiv. Bader and Kolb are a Germany-based design duo who bring together computer sciences and visual arts, focusing on a process- rather than product-oriented process.

The collection currently features four of these wearable skins, each inspired by different parts of the cosmos and human anatomy and biology. This project highlights Stratasys’ triple-jetting 3D printing ability to bring together the natural with the latest technology. Not only are these pieces created using multi-material 3D printing technology, but they are the first such pieces that aim to embed living matter.

“3D printing enables us to customize our designs and produce close to perfect-fit second skins informed by human CAT or MRI scans. The Stratasys triple-jetting technology of the Objet500 Connex3 color, multi-material 3D Production System offers designers unprecedented control over material properties such as rigidity, opacity and color at scales of just several microns. This enabled us to design for movement, as well as being able to implement spatially differentiated, layered channels, folds, pores and pockets. None of this would be possible with traditional fabrication methods,” says Oxman of her project.

Stratasys’ 3D printing technology was clearly vital to these organic designs. Because the wearables can be fitted directly to a specific individual, customization is complete from beginning to end in this process, enabling designers full control over the entire life of the project. Bringing together design, engineering, and the latest in technology, these wearables present “augmented extensions to our own bodies,” as Oxman puts it. The four designs in the collection are based on planetary bodies: Jupiter, Saturn, Mercury, and the Moon are represented as the inspirations for these pieces. Titles for the pieces are inspired the origins of the word “planet” — which comes from the Greek term planētēs meaning “wanderer.”

Likewise, 3D printing capabilities benefited each piece in different ways. Each used the multi-material 3D printing capabilities to enhance different aspects. For example, in ZUHAL, the size, density, and organization vary among the pieces of the textural exterior, enabled by the triple-jetting technology. AL-QAMAR, on the other hand, benefits from the triple-jetting technology in the different materials required: rubber and rigid, transparent and opaque, neutral and colored, and even standard type and bio-compatible material.

“With this collection,” explained Oxman, “we have designed spatially and materially complex wearables pointing towards the possibility of containing living matter that can interact with the environment. Each piece intends to hold life sustaining elements contained within 3D printed vascular structures with internal cavities, made possible with the dimensional stability and high-resolution accuracy of Stratasys’ 3D printing technology. Living matter within these structures will ultimately transform oxygen for breathing, photons for seeing, biomass for eating, biofuels for moving and calcium for building.”

Further work will be done on the collection, with the next stages of growth focusing on integrating living engineered cells into the pieces. The team strives for functional augmentation inspired by natural growth methods. Bader and Kolb’s computational growth process cultivates forms on the human body, drawing inspiration from growing and adapting seeds.
.
.
.
.
.
.
.
source: dezeen

Neri Oxman’s team at MIT Media Lab has created four 3D-printed “wearable skins” designed to facilitate synthetic biological processes that might one day allow humans to survive on other planets.

Neri Oxman and members of the Mediated Matter group at MIT Media Lab – an interdisciplinary research department at the Massachusetts Institute of Technology – collaborated with 3D printing company Stratasys to create structures with varied rigidity, opacity and colour.

The team used an Objet500 Connex3 Color, Multi-material 3D Production System to 3D print the “skins” in a range of plastics with different densities – each one suited to a different planet in the Earth’s solar system.

The project, titled Wanderers: An Astrobiological Exploration, includes four pieces that are imagined to be embedded with living matter.

Using synthetic biology, this matter would be used to create micro-habitats or systems that would allow humans to explore other planets in the solar system with environments that would otherwise be lethal.

“The future of wearables lies in designing augmented extensions to our own bodies, that will blur the boundary between the environment and ourselves,” said Oxman in a statement.

“With this collection, we have designed spatially and materially complex wearables pointing towards the possibility of containing living matter that can interact with the environment.”

The wearable structures incorporate pockets and tracts that could house the biological material, which would be synthetically adapted to make chemical changes in the surrounding atmosphere.

“Each piece intends to hold life-sustaining elements contained within 3D-printed vascular structures with internal cavities,” said Oxman. “Living matter within these structures will ultimately transform oxygen for breathing, photons for seeing, biomass for eating, biofuels for moving and calcium for building.”

The first piece, Mushtari, is designed to interact with the atmosphere on Jupiter and is shaped from a continuous translucent strand formed into layers that look like animal intestines.

Positioned around the lower abdomen, the device is proposed to consume and digest biomass, absorb nutrients, generate energy from sucrose accumulating in the side pockets and expel waste.

Zuhal is created to adapt to the vortex storms on Saturn. Bacteria contained on the bodice’s swirling textured surface would convert the planet’s hydrocarbons into edible matter.

For survival on Mercury, Otaared creates a protective exoskeleton around the head that can be custom-fit to the wearer.

Finally, Al-Qamar is designed as a “wearable biodome”. Fitted around the neck and over the shoulders, the exterior is made up of pods for algae-based air-purification and biofuel collection to produce and store oxygen.

“As a continuation, Oxman’s team is now in the process of integrating living engineered cells into the wearables for functional augmentation purposes,” said a statement from Stratasys.