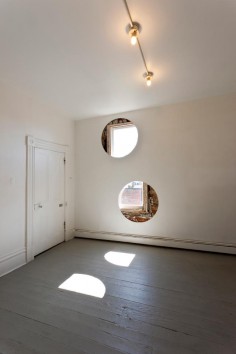 ‘on it we sleep, live our waking lives, fight—fight and are fought—seek our place, experience untold happiness and fabulous defeats; on it we penetrate and are penetrated; on it we love…’ – gilles deleuze

as part of the gestures: intimate friction show at the mattress factory in pittsburgh ‘glory holes’, an installation by american artist nina marie barbuto, delves into the histories of the spaces around us. the term, similarly used in hetero and homosexual copulation acts, serve as a portal for an anonymous yet intimate connection between the two bodies. as we move through the architectural space, we lose track of the larger figure, bones, and mass that surounds us.
.
.
.
.
.
.
.
source: carnegiemuseumsorg

Nina Marie Barbuto is keenly sensitive to how the environment shapes learning and creativity. After studying architecture at Carnegie Mellon University, the Aliquippa native moved to Los Angeles, earning a master’s degree from Southern California Institute of Architecture. Her studies in biological architecture led her to view buildings not as inert containers but as “inhabitable organisms.” Days before she graduated in 2008, the stock market crashed and “no one had jobs in the architecture world,” Barbuto explains. So she went exploring: from selling ice cream sandwiches named after famous architects to designing an apartment for actor Vincent Gallo. Then a research project about Los Angeles public schools deepened her interest in learning and environment. Returning to Pittsburgh in 2010, Barbuto found work as an architect and taught camps, classes, and workshops part-time at Carnegie Museum of Art, and, later, Carnegie Science Center. Last winter, she became program manager for its award-winning Girls, Math & Science Partnership, encouraging girls to reshape the workforce, something the Polish Hill resident knows a little something about. Also a working artist, she’s a well-known face in Pittsburgh’s start-up community, co-founding the I Made It! Market and Assemble, a new community learning space in Garfield. Barbuto views these disparate interests as related—ways for elevating the everyday to the extraordinary. Or, as she puts it, “making the vernacular spectacular.”