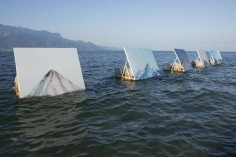 Climbing these shimmering mountains is a pipe dream. Try and you’d fail. An ice-cream stands a greater chance against the sun. It’s not because their slopes are so high no human could breathe at the summits. The opposite. These mountains are so small they’d crush under the weight of a day spa slipper. These are the tiny alfoil alps of Yuji Hamada’s imagination.

A Japanese photographer whose motto is ‘playfulness and pranks’, Hamada has been hooked on photography since his dad gave him a camera in his teens. Eighteen years on and he still carries that youthful spirit of ‘let’s try this and see what happens’ followed promptly by ‘I apologise, Officer, no need for those cuffs’. But when Hamada isn’t being reprimanded for letting off smoke machines in public, he’s on photographic standby, waiting for his inbuilt curiosity sensor to go off and send him running to capture the nearest subject.

In 2011, the idea for this series, Primal Mountain, found him. In March that year, a megathrust 30km underwater caused the Great East Japan Earthquake – the most severe to ever hit Japan, rippling out into a tsunami that would eventually cause the meltdown of nuclear reactors in Fukushima. Living in Tokyo, 375km from the epicentre, Hamada was safe, but not spared from powerful tremors and citywide panic. “Afterwards, everyday life quaked in the unreliable information that was being released,” Hamada says. “The information that was broadcast by the media, the information that we received, didn’t match up to the reality that was before our eyes.” Not long after Hamada became disillusioned with the Japanese media, a friend sent him a postcard from the Swiss mountains that was so picturesque, the longer he looked at it the more unreal it became. Faced with now two instances of real and fake colliding, Hamada decided to create a series that captured the feeling of doubt.

Using single pieces of aluminium foil, Hamada shaped small mountains between 15cm and 30cm in height. With his medium-format Mamiya RZ2 in tow, he took his models up to a rooftop in Tokyo – admittedly losing one or two when the breeze picked up – and photographed them against the sky. “The point of shooting under a real sky wasn’t to pass off something fake as real. Rather, I wanted to make something that showed ‘real’ and ‘fake’ becoming friendly with each other,” he says.

Hamada channelled sumi-e, the traditional ink wash paintings of East Asia, where the goal is not merely to create a likeness of the subject, but to capture its spirit. It’s possibly for this reason that the project took him over two years to complete. “With this work, what is most important is the image of a mountain in the viewer’s mind. Most people recognise them as real mountains. It’s only after the initial impression that they notice they are fake.”
.
.
.
.
.
.
.
source: vimeo

In March 2011, the Great East Japan Earthquake occurred. Afterwards, everyday life quaked in the unreliable information that was being released.The information that was broadcast by the media, the information that we received, didn’t match up to the reality that was before our eyes.
Around that time, one of my good friends sent me a postcard with a photo of beautiful Swiss mountains. It was so picturesque that the more I looked at the photo the more it started to look unreal, to the point that my brain started to register it as a two-dimensional drawing. I thought about how a photograph, which is meant to capture 3D aspects of the world, is perceived as something two- dimensional.
That set me off to find interesting materials that I could easily get a hold of. I settled upon aluminium foil, with its reflective and malleable qualities. From rooftops I started to photograph the foil with the Tokyo sky as the background. The point of shooting under a real sky wasn’t to pass off something fake as real. Rather, I wanted to make something that showed ‘real’ and ‘fake’ becoming friendly with each other.
With this work, what is most important is the image of a mountain in the viewer’s mind. In other words, it is not the maker of the images who establishes and delivers what is to be seen; rather, I surrendered the work to the viewer’s first impression, which led me to title the series ‘Primal Mountain’.
.
.
.
.
.
.
.
source: hamadayuji

Born in Osaka,Japan.Yuji started to photograph seriously when I was 18.
He graduated from Department of Photography,College of Art,Nihon Univercity in 2003.Two years after the graduation he belonged to japanese fashion publishing company,INFAS Publications as a photographer and studio assistant.And Yuji became a freelance photographer in 2006.
Now base in Tokyo.