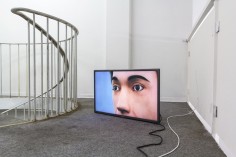 Welcome to the post-office. The office no longer. The space is hollowed out for the action one is not able to see anymore. Imagine only. The velocity of algorithmic ecology, the promiscuity and aggressiveness of their interaction. Their digital materiality, blending the synthetic and organic, digits and hardware into a hypnotizing mess. This mess is shaping the real at this very moment. Penetrating the neutrinos with profitable information, causing and healing hysteria in the speed of light. Hysteria that trades bonds for news in high frequency. Bad news, good news, fake news, real news. Liquid(ity) hysteria. Hysteria of liquids.
They say that an over-view is the gaze of power. In the blink of an eye the real on view is reshaped. Numerous times in different configurations. The power’s out of synch, out of tune. Volkswagen Golf on the wheels of Porsche.

Pakui Hardware* is a brand name of a collaboration between Ugnius Gelguda and Neringa Černiauskaitė set up in 2014. Pakui Hardware appeared to fill in an empty space of a removed brand logo. The title Pakui Hardware refers to Pakui, special attendant of Haumea [Goddess of fertility whose children were born of various parts of her fragmented body] at Kailua, who could circle Oahu six times in a day. Thus Pakui Hardware is high-speed and brand politics as mythic semio-commodity as well as the desire to transcend the material limitations. Semio-Capital meets materiality.
.
.
.
.
.
.
.
source: dismagazine

With their installation Shapeshifter, Heartbreaker, the collaborative duo Pakui Hardware (Neringa Černiauskaitė and Ugnius Gelguda). Černiauskaitė, a graduate from Bard’s Center for Curatorial Studies, and artist Ugnius Gelguda delivered a performance lecture at the Moderna Museet where topics ranged from digital materiality and technological prosthesis to high frequency trading. But don’t worry, if you miss their post-office installation you can see them at KIM? Contemporary Art Center in Riga, Latvia where they open their next show on January 13th.

Shapeshifter, Heartbreaker, is an installation on two levels composed of sculptural work and 3D computer animations that are both abstract and figurative. On the first level Pakui Hardware has designed an office desk using the typical components of a trading floor. However, this is not a work station for individuals; it is for computer aided trading, non-human activities which are approximated in the three channel videos atop desks noticeably lacking keyboards and mice. These activities often occur at an exceedingly fast pace, in the blink of an eye, an expression that lends its name to a video installed on the second floor. There, the blinks of a humanoid form have been accelerated to illustrate how fast the body would have to consciously react if it were operating at the speed of decision making that resulted in the stock market’s ‘flash crash’ of 2010.
.
.
.
.
.
.
.
source: pakuihardwareorg

Pakui Hardware* is the name (coined by Alex Ross) for the collaborative artist duo Neringa Cerniauskaite and Ugnius Gelguda, which began in 2014. The title Pakui Hardware refers to Pakui – special attendant of Hawaiian Goddess of fertility, Haumea – who could circle Oahu island six times in a day. Thus Pakui Hardware is high-speed and brand politics as mythic semio- commodity as well as the desire to transcend the material limitations. Semio-Capital meets materiality.

The duo’s work spans around the relationship between materiality, technology, and economy. How technology is shaping current economy and the physical reality itself, including the human body. In relation to the velocity of technological development, the matter becomes both an obstacle and a vehicle. These questions are analyzed through such examples as High Frequency Trading, technological prosthesis and digital materiality.

Neringa Cerniauskaite is an artist, curator, writer. She contributes texts for exhibitions’ catalogues and international magazines (Artforum, Flash Art, Parkett, ARTMargins.com, MAP, Mousse magazine). She is an editor of the web-based art magazine www.artnews.lt that was launched in 2008. She is a M.A. graduate, 2014, at Bard College Center for Curatorial Studies, NY.

Both artists are based in Vilnius and Brooklyn, New York.