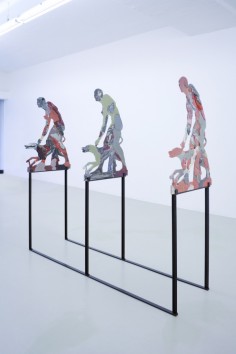 A new version of the Hunter and His Dog (2014) is presented as a series of bas-reliefs: three copies of the same sculpture by John Gibson (1838), 3D-scanned and hand-cast by Laric himself. The choice of this particular subject, an everyday scene in which Gibson portrayed a boy holding his dog by its collar, derives meaning from its mode of representation, which sets the human figure in a dualistic relationship with the dog. While Laric takes the white marble of Gibson’s detailed neoclassical sculpture as his starting point, he employs a different technique and a different material so as to transform the relationship between the two figures. The man’s former control over the dog becomes a continuity between two bodies, two subjectivities.
.
.
.
.
.
.
.
source: tanyaleighton

Oliver Laric’s work seeks to parse the productive potential of the copy, the bootleg, and the remix, and examine their role in the formation of both historic and contemporary image cultures. This process is intimately tied to his intuitive, idiosyncratic brand of scholarship, which he presents through an ongoing series of fugue-like expository videos (Versions, 2009—present), and further elaborates through his appropriated object works, videos, and sculptures, all of which are densely conceptually layered and often make use of recondite, technologically sophisticated methods of fabrication. Straddling the liminal spaces between the past and the present, the authentic and the inauthentic, the original and its subsequent reflections and reconfigurations, Laric’s work collapses categories and blurs boundaries in a manner that calls into question their very existence.

Oliver Laric is an internet-based artist, born in 1981, in Innsbruck, Austria. Laric’s web-based artistic practice or net art is characterised by the manipulation and reinterpretation of existing cultural images. His work blurs boundaries between the authentic and the inauthentic, the original and its subsequent reflections and reconfigurations.He has participated in many group exhibitions as well as in numerous solo exhibition worldwide. He currently lives and works in Berlin.