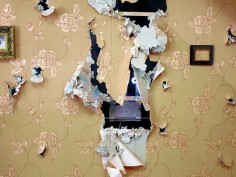 Zwischenräume develops an autonomous sculptural practice that embeds robots into the architectural fabric of a gallery. It is the first installation in a series of works that explore the anatomical trauma of a machine augmented environment and its performative potential.

Embedded into walls, the robots produce cracks, holes and scars to survey, collaborate, provoke, conspire, and intervene. Each machine assembly interacts and networks with the other machines by re-sculpting its environment. The work adopts methods from urban combat and anti-terrorist visual intelligence to construct an autonomous environment that is intrinsically motivated to look at and study the temporary inhabitants, and develop strategies on how to attract attention, provoke and conspire. The architectural fabric becomes the medium for the agents’ communication and intervention.

The aim of this robotic sculptural practice is to attach a process to the environment, rather than creating a machine spectacle. The installation injects itself, disturbs and transforms our environment. Yet this disturbance is not a trace manifesting a transformative event in the past. Rather, the process of injecting itself is ongoing as the machine-augmented environment evolves based on mutual perturbations between the material conditions of the space and the movements and actions of its inhabitants and the adaptive behaviours of the machines agents.

Zwischenräume has been developed with the support of a COFA Faculty Research Grant and a New Work Grant from the Medienkunstbeirat (Media Arts Board) of the Austrian Federal Ministry for Education, the Arts and Culture, and has been exhibited at the Schauraum Angewandte at the MuseumsQuartier 21, Vienna, in June 2010.
.
.
.
.
.
.
.
source: blogsunsweduau

The paper discusses transdisciplinary strategies to investigate machine autonomy driven by visual intelligence and an embodied aesthetics that performatively materialises the machine’s sensory-cognitive negotiation with its environment. Looking, reflecting and acting becomes a mutual process that propels the relationship between the machinic inhabitants and their human environment, as much as it does between the human inhabitants of the machinic environment. The strategies are developed and examined in the form of an installation environment, “Zwischenräume”, in which autonomous robots are embedded into the architectural fabric of a gallery space. The work adopts methods from urban combat and anti-terrorist visual intelligence to construct an autonomous environment. Embedded into walls, the robots are intrinsically motivated to explore the environment and study the inhabitants. Movements, colours and faces are processed to create an adaptive model of the surrounds that allows the robotic agents to expect learned behaviours and proactively intervene. Each machinic assembly interacts and networks with the other machines by re-sculpting the environment, producing cracks, holes and scars, they develop strategies to survey, provoke, and conspire. The architectonic environment becomes the medium for the agents’ communication and intervention. Similar to autopoietic systems, the machines are structurally coupled with the architectural environment, and both evolve through ‘mutual perturbation’ (Maturana and Varela, 1980). As a result, the visual intelligence performed by the sensory image drives the materialisation of the agents’ evolving perspective, whose disruptive marks and traces, in turn, produce an image of the politically charged relationships they provoke.

Bio
Petra Gemeinboeck is a Senior Lecturer in Interactive Media Arts at the College of Fine Arts, UNSW. Her practice in machine performance, interactive installation, and virtual environments explores the ambiguities and vulnerabilities in our relationships with machines, making tangible the desires and politics involved. Her works have been exhibited internationally, including at the Ars Electronica, Archilab, Thessaloniki Biennale, MCA Chicago, ICC Tokyo, OK Center for Contemporary Art, and the Centre des Arts Enghien at Paris. Petra has also published widely on issues of interactivity and machine agency.

Rob Saunders is a Senior Lecturer in Design Computing at the Faculty of Architecture, Design and Planning, University of Sydney. Rob’s research engages with creative agency, computational curiosity, and robotic art. Using techniques from machine learning, robotics and surveillance he explores the role of curiosity in creative processes and develops models of creative systems at individual, social and cultural levels. Rob collaborates with artists and designers to apply his research in design customisation systems, interactive installations and robotic artworks.