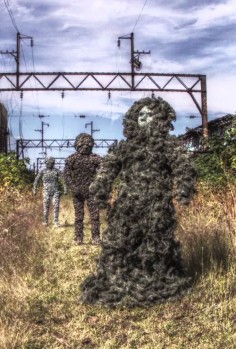 Tobias Stretch channels the beauty and melancholia of Hauschka’s single “Craco” in his uncanny video filmed in Philadelphia’s answer to Brooklyn’s High Line, Reading Viaduct Park. With music videos for Radiohead, Crystal Fighters and Christopher Bono to his name, the Philly-based animator is known for his distinct aesthetic and method, pairing landscape photography with life-size stop-motion puppets. “I thought right from the beginning when I saw Tobias’s work that it has a mixture of analog and handmade elements and a surreal atmosphere. In my music you have similar elements,” says Hauschka himself, aka the German pianist and composer Volker Bertelmann, who headline’s London’s Union Chapel tonight as part of his European tour. Although best known as a 21st-Century protagonist of the prepared piano practice championed by John Cage, Bertelmann “left all the preparations at home” in order to work with a pure sound on this track. Named after the Italian ghost town,“Craco” is taken from his entropy-laced album Abandoned City and played to Stretch’s own fascination with urban decay. “The music was there beforehand, but I had a bowl of music and a bowl of names and I tried to pair them up. I think the music sounded not only like an abandoned place but also like a nostalgic place and that’s why I thought it was a great match.”
.
.
.
.
.
.
.
source: directorsnotes

With a back catalogue of music videos which lists Radiohead and Efterklang as collaborators, Director/Animator/Sculptor Tobias Stretch has become somewhat of a go-to-man when it comes to unique, stand-out music videos. Lending his distinct vision to track Craco from German pianist HAUSCHKA, the two artists come to together to create a real piece of beauty and emotion – something not often seen in the world of music videos.