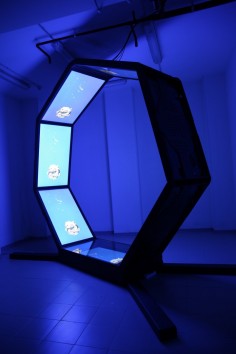 MYrvoLD is born in Norway, and has lived in Paris and New York since 1992.
Since the early 80s, Pia MYrvoLD has worked within a wide field of techniques, developing and combining different mediums: painting, sound, video, infrastructural design, living art and urbanism, and new technology. MYrvoLD’s hybrid research within visual media has given the art and design world new and unique concepts, including CyberCouture, clothes as publishing, multi-surface works, female interfaces, and projects in the border area between virtual and real spaces – with interactive art as a recurring element. MYrvoLD – who started out as a painter – has also continued with traditional media, and continuously produces new series of paintings, graphics, sculptures and videos, where her visual narrative refers to technology, DNA coding, sensory based objects and interfaces, where the dialectics between the object and the space suggests guidelines and new codes for how society can use and develop new sensuality.
MYrvoLD’s career started at age 20, debuting at Vestlandsutstilingen and the Norwegian National Autumn Exhibition. Since then, she has had numerous important assignments and museum exhibitions in Norway, and taken part at international exhibitions in Paris, New York, Los Angeles, Venice, London and Berlin. MYrvoLD is purchased by the largest public collections in Norway, including the National Gallery. Pia MYrvoLD’s first solo exhibition in Gallery Ramfjord is in October 2014.
.
.
.
.
.
.
.
source: euran

Pia Myrvold started her career as a painter, and did from 1981 to 1985 enter the important group exhibitions in Norway with her paintings, that established her as one of Norway’s most promising young artists and the youngest member of the Norwegian Artist Organization.

She began working during this time with interdisciplinary arts, and developed projects with video, performance, urban planning, interior architecture and costume and fashion, alongside her career as a painter.

In 1985 she won a competition for outdoor installation at the Nordic Textile Triennale, with giant textile figures suspended from trees and architecture in the Gallery F15 park.

In 1985 she initiated and curated the Sola International Art Festival, at Sola Beach, Norway with artist and partner for many years, Randy Naylor.

The following years she had many solo shows in Art Galleries, in Bergen, Olso, Drammen , Stavanger Kunstforening, and continued developing projects with fashion as wearable art, performance and video installation and designs of restaurants, night clubs and offices in Stavanger and Oslo.

In 1989 she initiated and curated the exhibition “Enter This way” in Rome, with artist Randy Naylor and with the support of the Norwegian Royal Ministry of Foreign Affairs.

In 1991 she recieved a scholarship to work in Paris, Cite International des Artist and Ingrid Lindback lLngaards Stifteles, that resulted in a commission by architect Bernard Tschumi, the architect of Parc de la Villette, Paris.

In 1992 she designed, produced the 500 meter long textile installation project “Urban Upwind” in Parc de la Villete, with artist Randy Naylor and the support of the French Culture Ministry and Norwegian Royal Ministry of Foreign Affairs.

She was then invited by the Syndicat for French Fashion designers to show on the Official Calendar fall 1994, and has since shown regularly on this calendar, two collections a year until 1999.

In 1995 she presented her first multimedia presentation for the collection “Interfaces” in Divan du Monde, in Paris, with her own music, choreography, video and camera installation and direct transmission over internet.

The following year she developed concept “Clothes as Publishing”, where she invited artist and architects like Jean Nouvel, Bernard Tschumi, Dimitri from Paris, Norbert Hillaire and Jaques Denarnaud to publish their work and images on the clothes. She took out a domain name on the web.

In 1997 she collaborated with composer Rolf Wallin and Notam to make the first Interactive collection, called “Dada Memory”, where models pressed buttons on clothes to activate sound and image loops, thus using the clothes as architectural interfaces.

In 1998 she made a video installation “Post Machine, where models were projected directly on the walls in the gallery, instead of the traditional catwalk.

At the Web Bar, Paris 1999, she launched the first interactive design studio at her website, with a project called “Dream Sequences” celebrating the Millennium.

In 2000 she was the official exhibitor in Bergen Cultural Capital 2000, with a large solo show in The West coats Museum of Applied Arts and design, with performances in collaboration with Carte Blanche Dance Company. . Queen Sonja of Norway opened version 2 of her web site with the new interactive design studio.

Later that year she had performances and shows with this project in Helsinki and Iceland, as well as an exhibition during Paris Haute Couture week in July, where composer Steve Lacy and singer Irene Aebe inaugurated the exhibition.

February she showed on her web site with a multimedia fashion show in New York Mercedes Benz Fashion week in the tents at Bryant Park.

The same month she took part in the group show “Contemporary Design” at Sotheby’s in London.

Pia moved to New York in the fall, and started a collaboration for her web site with industrial designer Karim Rashid. The project was delayed because of the terrorism attacks, and lost funding, but was presented in New York Mercedes Benz Fashion Week in September 2002, in Fellisimo Design House. This was the 3rd version of the interactive design studio, with all garments designed in digital files and sent to printers and producers over Internet.

Pia Myrvold had a daughter Isa, March 2003, and moved back to Paris. This year she has made two collections and been part of the design exhibition “100% Norway” in Deluxe gallery, London.

In 2004 she is invited to show her work with interactive clothes “Female Interfaces” in a group show “Listen” in Centre George Pompidou, Paris.

In between these highlights, she has had several painting shows, most notably in Galleri Amare, Stavanger and Galleri Galtung, Oslo, where she has a loyal public buying her paintings and lithographs. There are several video works and installations, where she directs, films and edits and makes the music tracks made in collaborations with musicians like Bugge Wesseltoft, Rolf Wallin, Nile Rodgers to mention e few.