Lost In My Life 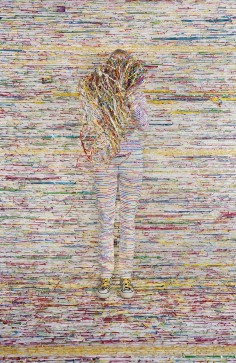 American artist Rachel Perry Welty makes use of the scads of everyday items we tend to throw away in her new ‘Lost in my Life’ series. She layers the often overlooked items to create a whole new textured landscape.

“Most of us don’t pay much attention to the mundane objects we use everyday,” explains Welty, “like the twist ties that hold the plastic wrap on our bread and the broccoli together or the little paper cups that we pull out of a water dispenser.”
.
.
.
.
.
.
.
.
source: spottrhu

Every artist must work within certain limitations, and these limitations come in a variety of forms. It could be financial restraints, a lack of free time, formal education, or materials, or something as basic as having limited skills or knowledge. Rachel Perry Welty is a marvelous example of how an artist can use such limitations to her benefit.

Welty is a self-described “late bloomer” and didn’t attend art school until age 36, when she decided to follow in her mother’s footsteps and attend the Museum School in Boston.

“I discovered art around the same time that I became a working mother,” Welty explained to me, “so the only way I knew how to make it was to maneuver it into my day. I gravitated toward materials that were around me and that were easy to pick up and put down, as a defense against the frustration of regular interruptions.”

By making art throughout the course of her day and using everyday objects like receipts, bread tags, aluminum foil, and telephone messages as her medium, Welty found a way to make art in spite of her busy family schedule.

It’s the minutia of middle-class, American life that most fascinates Welty. As a conceptual artist, the message is more important to her than her medium. Working in the tradition of artists like Mary Kelly, Warhol, John Baldessari, and On Kawara, Welty uses photography, drawing, video, social media, installation, collage, sculpture, or whatever method is the best fit for the idea she wants to convey.

To have your only child end up in the hospital with a serious illness is a parent’s worst nightmare. It was this harrowing experience as a mother that was a turning point for Welty as an artist. Altered Receipt: Children’s Hospital Bill for Inpatient Services and Transcription/Medical Record #32-52-52-001 (654 Pages) were painstaking artworks Welty created using actual records in response to her son’s illness. For Altered Receipt she devised a color-coded system that corresponded to each number and letter of the alphabet, and then painted over each of those symbols on the 37-page receipt.

Although her son is now grown, healthy, and no longer at home, Welty continues to make art out of her everyday surroundings. When I arrived at her spacious, modern home in Annisquam, Massachusetts, on a sweltering summer day, I found an array of colorful gum packets, stickers, aluminum-foil words, plastic strips from food packaging, and other fascinating odds and ends spread around her office and studio.

The books on her kitchen shelf were wrapped in aluminum foil, a lasting tribute to her piece Lost in My Life (wrapped books) and above the kitchen counter was a recent piece, Cash for Your Warhol, by artist Geoff Hargadon. Several of Welty’s own artworks hang in the house, including a series of small, framed receipt drawings, whose tiny, intricate markings seemed to recall Welty’s upbringing in Tokyo.

During the dinner party that Welty and her husband, Bruce, hosted for myself and nine other guests, two 18th century portraits of Rachel’s great, great, great, great grandparents, Mary and John Rooker, peered over our shoulders. The portraits are a striking contrast to the rest of the decor in Welty’s open-concept, modern house.

At the end of the meal, Welty asked her guests to sign their names on the white linen tablecloth. The next day Welty sent me a photograph of my own signature, which she was in the process of embroidering with white thread. The artist has been recording the signatures of dinner guests since she moved into her home in 2009; every person who has shared a meal with the artist and her family in Annisquam has signed. Eventually, Welty plans to create a public artwork out of the tablecloth. It is Welty’s nod to Judy Chicago’s The Dinner Party, but also her own original way of using art as a record for her everyday life.

The artist has been recording the signatures of dinner guests since she moved into her home in 2009; every person who has shared a meal with the artist and her family in Annisquam has signed. It is Welty’s nod to Judy Chicago’s The Dinner Party, but also her own original way of using art as a record for her everyday life.

Welty’s work has transformed the way I view these banal objects in my own life. I can’t remove a sticker from a piece of fruit now without thinking of her Lost in My Life series or her elegant drawing Sin and Paradise, made from sliced fruit stickers.

As deCordova curator Nick Capasso says in the catalog to Welty’s solo show at the museum, pieces like Lost in My Life show “consumerism run amok.” Capasso rightly points out that many of the material Welty uses, such as twist ties, styrofoam, and bread tags, are preservative in nature, yet in Welty’s work these objects perniciously erase the artist’s identity.

Welty has not been afraid to embrace technology in her artistic practice. She has an ongoing diary project on Twitter and in 2009 she created the Facebook project Rachel Is, in which she recorded an entire day’s activities in real time on Facebook, updating her status every 60 seconds. For her piece Karaoke Wrong Number, Welty collected all of the messages on her telephone answering machine not intended for her or her family, along with the machine’s time and date stamp. She then lip synched to each recording, creating a persona for each “character.”

“We’re always just a hair’s-breadth away from completely misunderstanding one another,” Welty told WBUR in a radio interview. “Somebody listens to it, pushes a button, deletes it, and it’s gone forever. And we do this in our lives daily with all of the information that comes in.”

The artist’s Deaccession Project began in 2005 when Welty decided to discard, sell, gift, and recycle some of the clutter in her life. As Nick Capasso explains, “this life-based performance is documented each day on a page with a photograph of the object in question, and accompanying brief notations that include number/sequence, date, description, reason for deaccession, and method of disposal or ultimate destination. The pages are then ordered chronologically in scrapbooks.” For Welty’s show 24/7 at the deCordova, the 2,028 pages were scanned, reprinted, and arranged in a chronological grid along a single 78-foot gallery wall.

For her Spam Series, Welty transformed spam email into poetry using a simple household object: aluminum foil. “Spam is a daily annoyance,” Welty explained, “but in these words that came to my inbox, I found something accidentally poetic. I was struck by the sheer possibility suggested by these messages. Taken out of the context for which they were intended, and re-inserted into another kind of economy (that of the gallery) the words become something hopeful and quite beautiful.”

The catalog for 24/7, which was published in conjunction with her solo shows at the deCordova and Zimmerli Art Museum, is a work of art in itself. The special artist book was designed by Welty and Anita Meyer. Not only is it a lovely catalog of Welty’s work, but the attentive reader will find a number of surprises inside.

After perusing the book several times, I realized that there were hidden notes and email messages printed in between the pages of the book. The hidden documents record a decade’s worth of studio visits and typed email communications between curator Nick Capasso and Welty. Any artist who has been repeatedly rejected by an institution will be both entertained and comforted by these messages. It’s a fascinating glimpse at the relationship between curator and artist and at the business side of art making — a side that is often invisible to museum-goers.

In 2011 Welty had the opportunity to collaborate with Vogue magazine. You can see a sampling of the

This weekend, Welty’s new show Water, Water, which is a collaboration with her mother, artist Sarah Hollis Perry, will open at the Cape Ann Museum in Gloucester, Massachusetts.

Perry and Welty organized and filmed their video performance Drawing a Line with the Tide in July 2011 using eighty volunteers from the seaside village of Annisquam in Gloucester, Massachusetts where they both live. Moving to avoid the inevitable, the performers demonstrate a futile attempt to control nature with its stubborn adherence to the circling of time. Included in the installation are five short films in which the artists explore aspects of identity and the complexity of the mother-daughter relationship of dependence, independence, and interdependence. In addition to maintaining separate practices, Perry and Welty have been working collaboratively since they overlapped as students at the School of the MFA, Boston in 2000.

For a “late bloomer,” Welty has come a long way in the past ten years. She is a two-time winner of a Massachusetts Cultural Council grant for excellence in Sculpture and Drawing, a finalist for the Foster Prize at the Institute of Contemporary Art, and a MacDowell Colony Fellow. Welty has participated in group shows at The Drawing Center (New York), Yerba Buena Center for the Arts (San Francisco), Fort Lauderdale Museum of Art (Florida), Kunstmuseum Bonn (Germany), and The Institute of Contemporary Art, Boston (Massachusetts). She has also had solo shows at the deCordova Museum (Massachusetts), Yancey Richardson Gallery (New York), Barbara Krakow Gallery, Gallery Diet (Miami), and Zimmerli Art Museum (New Jersey).
.
.
.
.
.
.
.
source: stary10167blogspot