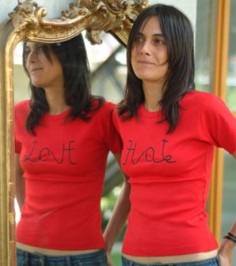 source:rachelpflegercom
Rachel Pfleger is a freelance Senior Graphic Designer with an established career in book design since 2000. She has developped a number of high-quality books across all areas of visual creativity. She has collaborated directly with many clients such as artists, architects, designers, scholars on monographs and illustrated reference titles mostly in the field of art and architecture but also photography, design and popular culture. During her 12 years at Black Dog Publishing as Senior Graphic Designer, she has designed over 80 books.

Rachel’s design training introduced her to disparate and far-reaching design applications. Following her graduation she focused independently on graphic aspects and therefore considers herself to be more of a self-made graphic designer. She finds constant inspiration in the world around her, whether it be through music, art, popular culture or design. Her unprejudiced cultural enthusiasm acts as an underlying drive both in her life and work. Indeed, graphic design is both the tip of the iceberg and the umbrella under which everything comes together. It is a practice Rachel discovered slowly and matured for years, before realising it was the ideal interface through which to express her varied aesthetic and creative baggage.

She has come a long way since her childhood experiments in designing tape jackets and collecting bits and bobs, postcards, found images, magazine cut-outs and lettering Letraset transfers (not that that she has lost the habit…). From her early predilection for sciences, at the age of 16, Rachel went on to discover acting and opted for an artistic curriculum instead. Her Philosophy and Fine Arts Baccalauréat led to a two-year BTS in applied arts (Higher National Diploma) in Lille, and later a Master degree in advanced design studies from Ensci-Les Ateliers in Paris (only French national Institute exclusively devoted to advanced studies in design), which she obtained in 2000. Graphic design was a revelation she stumbled upon during her time at Ensci, when she became involved in a six-month workshop aimed at devising a visual identity and brochure for the school. Winning the contest brief earned Rachel her first professional graphic design experience working with Laurent Ungerer’s Paris-based studio c-album where she completed the designs for Ensci’s brochure and worked on various projects including one for the Centre Pompidou’s exhibition L’Art de l’Ingénieur, the museum’s last major show before a two-year closure and refurbishment.

Rachel’s approach to design is underpinned by an attempt to evoke rather than emulate. To achieve this, she seeks to arrive at the archetype of her subject matter in order to refine an essential design. She stays away from banal referencing and therefore avoids caricature in her own work.

In the recent years, Rachel’s work has focussed on book design. She has developed a number of successful artists’ books as well as worked with architects, designers and scholars on monographs and illustrated reference titles. Books remain her major interest, although she is well versed in exhibition layout and signage, as well as brochure, invitation and identity development. (Adriana Caneva, 2012)

1000 produced/ Ambigram design for a tee-shirt as a calligraphic design that manages to squeeze two different readings into the selfsame set of curves, ‘Hate’ transforms into ‘Love’ when seen in a mirror and vice versa.