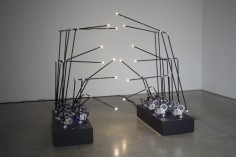 source: randominternational
The series Fifteen Points experiments with the amount of information necessary for a moving form to be recognised as human; and the fundamental impact created by subtle changes within that information. When positioned in order and animated in a particular way, the robotically steered points of light make up the form of a walking person. Even the most minuscule manipulation of the points’ position can cause the form to return back into an inorganic, geometric arrangement. The human ability to decipher and distinguish movement is continually at play. Fifteen Points asks if it is possible to extend these instincts from the realm of the natural to that of the artificial, and what relevance this might have in the future.
.
.
.
.
.
.
.
source: designboom
at new york’s pace gallery, random international presents a solo exhibition of works that investigate how we perceive and process visual information — particularly in relationship to the human body, and our own reflection. from now through october 22, 2016, ‘on the body’ marks the first presentation of new pieces in new york by the artist collective since MoMA hosted ‘rain room‘ back in 2013. this experimental series of projects offers a tangible manifestation of the relationship between humans and machines through a range of visual, material and technological methods.

at the core of the exhibition at pace gallery is ‘fifteen points / I’, a human-scale sculpture made up of industrial robotic arms, each mounted with a single LED light. moving simultaneously in an accurately programed sequence of maneuvers, the illuminated points on the sculpture align to create the perceived silhouette of an animated, walking figure. despite the undisguised mechanisms at work, humans are able to visualize the form in motion with a minimum of visual information available.

‘fifteen points’ is the result of random international’s ongoing study of motion, representation, and perception. the sculpture has been produced following a residency at the biomimetic robotics division of the harvard school of engineering and applied sciences, facilitated by le laboratoire. this piece — alongside a smaller study for ‘fifteen points / I’ also on display — explores the instinctual ability of humans to decipher subtle nuances in form, expressed in their capacity to visualize a figure in the display of kinetic lights.
.
.
.
.
.
.
.
.
source: pacegallery
Random International is a collaborative studio for experimental practice within contemporary art. Founded in 2005 by Hannes Koch and Florian Ortkrass, the studio now includes a larger team in London and Berlin. Questioning aspects of identity and autonomy in the post-digital age, Random International’s work invites active participation. Their work Rain Room—a large-scale environment of continual, responsive rainfall—has been exhibited at Los Angeles County Museum of Art (2015); Yuz Museum, Shanghai (2015); Museum of Modern Art, New York (2013); and London’s Barbican (2012). The studio’s work formed part of the Lichtsicht Biennale (2015), Ruhrtriennale (2013), and Moscow Biennale of Contemporary Art (2011). Solo presentations of their work have been exhibited at Lunds konsthall, Sweden (2014) and Carpenters Workshop Gallery, Paris (2012). Their work is in the collections of MoMA, LACMA and Victoria & Albert Museum, where their Swarm Study III is on long-term display.