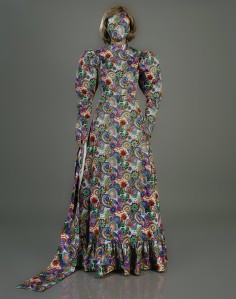 source:voguecom
If you’ve managed to keep up with the news cycle these past few days in London, you know that the U.K.’s political system seems to be hanging by a thread. With the country on the brink of a no-deal Brexit and the possibility of an ly general election on the horizon as well, Britain’s place in the world has never been more unstable. At Richard Quinn’s show this evening, that troubling dissonance was instantly soothed by the sound of the Philharmonia Orchestra and the Bach Choir. Quinn clearly understands the healing power of music—his shows have played host to a number of life-affirming musical performances in the past, including one by British singer Freya Ridings. But more than that, he believes the runway should uplift and inspire. “A fashion sanctuary, where we can all come and celebrate,” was how he put it in the show notes.