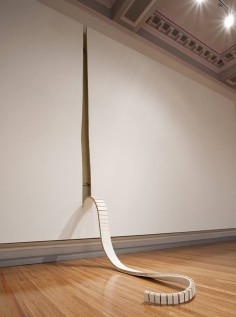 Robbie Rowlands looks closely at the everyday objects around us, he questions their nature, their stability. Working both familiar and found materials, Rowlands cuts into and manipulates the recognisable, peeling back one form to reveal another, reflecting upon the passage of time and what lies beneath the surface of our familiar world.

Robbie Rowlands was born in 1968 and lives and works in Melbourne, he graduated from The Victorian College of the Arts in 1999. Rowlands studied at Pratt Institute, New York after, his first solo exhibition FOUND came out of this work. Rowlands participated in the exhibitions Structure, Space and Place, at the Tower Hill Memorial, Kangaroo Ground, 2007 and 26 Surf Street, Merricks, 2007, The offering 2009.
.
.
.
.
.
.
.
source: mymodernmet

Melbourne-based artist Robbie Rowlands manipulates and distorts unexpected spaces in these surreal sculptures. In his work, he bends and twists everyday items, pieces of outdoor landscapes, and sections of interior buildings that have been either condemned or are scheduled for renovations, and refigures them into these creative distortions.

There is a precision and symmetry to all of the pieces, as he tears up strips of floorboards, bends pieces of wall, or twists the pole of a street sign into a snake-like shape. His bio explains that his manipulated objects and space “blur the boundaries between our fabricated world and the natural world.” The destructive nature of tearing up floors and walls allows viewers to visualize the old space and contemplate and reinterpret the new scene. Philsopher Martin Heidegger says that, “It is only when things break down that we become aware of them, seeing them with fresh eyes.”
.
.
.
.
.
.
.
source: nambrenaurbano