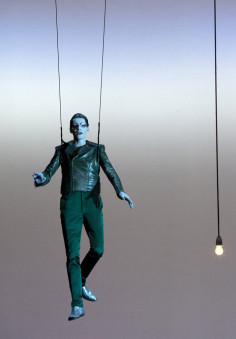 克勞斯．佩曼本身是著名的戲劇導演，1966年他以執導彼得．漢德克《觸怒觀眾》引起德國劇場界的矚目，他擅長將劇本抽絲剝繭，深層挖掘劇作意涵，重新詮釋經典作品，並獨具慧眼發掘新的劇作家。佩曼以其戲劇才華被德語圈劇院聘任為總監，包含斯圖加州立劇院、奧地利城堡劇院等，在奧地利任職期間，他結識了許多奧地利劇作家並執導他們的第一齣戲劇作品，1999年起擔任柏林劇團的藝術總監，使劇團再度成為德國劇場界的指標，亦贏得國際讚譽，因此號召了不少傑出的演員和導演，例如羅伯．威爾森、彼得．史坦、彼得．查德等參與製作，再次奠定屹立不搖的基礎。
.
.
.
.
.
.
.
source: inhalemag
Every other year, Robert Wilson comes to Berlin in order to create something extraordinary for the Berliner Ensemble, including Leonce & Lena (2003), Das Wintermärchen (2005), Die Dreigroschenoper (2007; which had an enormously successful guest run at the Brooklyn Academy of Music in 2011 and just celebrated its 200th performance at the BE), Shakespeare’s Sonnets (2009), and – most recently – Lulu (2011), which was not much liked by critics and audiences alike. In fact, German reviewers seem to have grown distant to Wilson’s work over the years, bemoaning the fact that he creates the same images in the same way time and again.

It is all the more fascinating that it is Wilson’s newest piece, Peter Pan, which has sparked the most enthusiastic and euphoric reviews in years throughout the German press, for this adaptation of James M. Barrie’s play in a translation by Erich Kästner does leave nothing of the Disney version’s carefree dreaminess and celebration of youth but unearths the dark and unsettling aspects of Barrie’s original work. By creating his signature world of evocative images, Wilson turns the notion of childhood predicated on safety, naïveté, and innocence upside down and makes Peter Pan his own.

The first chapter is set in the children’s room, decorated with a ghastly wallpaper of green ships on a neon-pink base, exhibiting Wilson’s odd version of the English bourgeois home life, a first indication of his counter-intuitive interpretation of the piece. The actors appear in stylized Victorian costumes by Jacques Reynaud, moving through the space in typical Wilsonesque fashion, and uttering their lines independently from each other as the small window to the world becomes bigger and bigger. The plot follows the original play quite closely although a number of events are translated directly into images and dialogue becomes sparse.

Nevertheless, I have to say that – for my taste – there was still too much dialogue, especially in the first part of the evening, which hindered the rhythm of the scenes and the development of an overarching energy throughout the first hour, as the connection between dialogue and the songs seemed to be at times forced and patched together rather than flowing and progressing. Wilson’s work is the strongest when he’s able to create an equilibrium between text, music, sound, light, and image – a flash of harmony (including all superficially disturbing noises) that gestures towards the diversity of voices in our world. And as the evening went on, the piece became stronger and stronger and was by the end almost hypnotic without being sweet or sentimental at all.

Once the children are in Neverland, the production picks up speed and becomes more inventive: the dialogue is disrupted by song, dance, and beaming faces, which expose the nightmarish quality of some exchanges, for example when Wendy is asked to become the mother of all the Lost Boys. The scenes with Hook and the pirates can be ruffian at times and in all the playfulness of the fights between the Lost Boys and the pirates, the actual violence of these imaginings is very apparent. It is most striking when Peter, trying to save Wendy from Hook, hides inside the Jolly Roger and kills the pirates one by one, only to emerge radiant and exclaiming: “I am Youth! I am Joy!” It is Wilson’s excellent and breathtaking direction, which enables this childlike and entertaining joy to coexist with an alarming and menacing atmosphere of impending brutality and death. This is also true for the quieter moments, the most unnerving and provocative being when Hook, alone with the sleeping Peter, dreams of “making him into a man”. And yet, this potential nightmare of childhood holds fast to the side of hope and light as well, when for example the fantastic Anna Graenzer as Wendy sings the Lost Boys to sleep with a heartbreaking lullaby celebrating love and family, while in the background Hook and his pirates kill the Indians.

Thus, Wilson pays tribute to the complicated nature of childhood and life: It is not the protected home of bourgeois life that is to be desired, nor is it the dangerous, anarchic world of Neverland. It is the commitment to both through the company of family and friends. But just when this may become too easy and too sentimental a solution, the audience is reminded at the end of the first and the second act respectively that death will come to us all eventually. And yet again, as Peter and the ensemble sing to us joyfully, “to die would be an awfully great adventure.”
The performances are magnificent to say the least. While the ensemble blithely takes on multiple roles as Lost Boys, pirates, Nana, the Indians, the Mermaids, and the Crocodile, one of the standout performances comes from Traute Hoess as Mrs. Darling, whose Despair song, after finding out her children have disappeared, develops into a primordial expression of pain. Stefan Kurt’s Hook is counter-intuitive yet spirited, quiet but very sharp, and in his surrender to the crocodile rather touching. Sabin Tambrea as Peter Pan is pure joy to behold: in his green skinny jeans and leather jacket, he looks like a cross between James Dean and Heroes-era David Bowie.

His Peter remains the foil for all projections of what one wants youth to be and thus he is utterly changeable in both voice and body. Tambrea’s Peter never stays in one character for too long as he does not want to be defined or found out. Maybe he does not even know who he actually is, which makes this mixture of sway and vulnerability so enticing and familiar. But the star of the evening is without a doubt Christopher Nell’s Tinkerbell, who crosses the stage in odd spasmodic movements and can only be heard through song. Her wand sends off electric shocks and she delights in torturing the children. But when, while being trapped in a light bulb, she bemoans the fact that Peter does not realize how much she loves him, the audience is treated to one of the finest songs about unrequited love ever written, voicing desire, despair, and anger in equal measure. Indeed, CocoRosie’s songs are a true discovery and the perfect fit for this production as their music succeeds in making available conflicting emotions within a few bars. Thankfully, some of the songs will apparently be made available on their next album, Tales Of A GrassWidow, which will be released later this month.