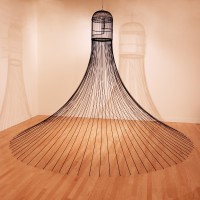 Motivated by personal experiences, and stimulated by process and materials the work of Roger Chamieh explores the concepts of mortality, aging and fear through the use of haunting visual metaphors. Chamieh’s work explores the dynamics of fragility, tension and contradictions through the dependence of forces both seen and unseen. Working within this context of oppositions, he creates artwork that challenges one’s conventional ideas of the sculptural object through his use of materials, both constant and ephemeral and the precarious balance realized in the execution. Furthermore, Chamieh’s use of kinetics, as well as the elements of sound and more recently, video, function together to subvert his own personal experiences and his fascination with the fragility of life; often resulting in objects that engage directly with the viewer and convey something bordering on performance.
Roger Chamieh was born in Lebanon, raised in the Persian Gulf and educated in London, England. He earned his Master’s Degree in sculpture from Syracuse University in Syracuse, New York. He currently resides and teaches in Florida.