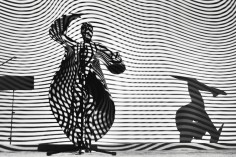 source: cylandfest
The performance was created as a part of the annual Moscow Lexus Hybrid Art festival and was first shown at the exhibition opening, which focus was on the idea of synergy. Synergy (whole, transcending the sum of its parts) in the arts is formed by the collision of artistic discourse with the latest technological tools. Hybrid Performance is the result of such merge. Festival curator Katya Bochavar invited Roman Ermakov and Ivan Onoprienko to create an original work of art with optical illusions in the form of musical performance. Combining the works of contemporary and classical chamber music, Dmitry Vlasic created a unique sound compilation with the exhibition manifest narrated by Lilia Gysina. Young circus artists also take part in this performance, filling the optical space with gymnastic sketches.