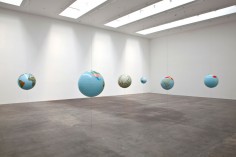 Sam Durant is a multimedia artist whose works engage a variety of social, political, and cultural issues. Often referencing American history, his work explores the varying relationships between culture and politics, engaging subjects as diverse as the civil rights movement, southern rock music, and modernism. His work has been widely exhibited internationally and in the United States. He has had solo museum exhibitions at the Museum of Contemporary Art, Los Angeles, Kunstverein für die Rheinlande und Westfalen, Dusseldorf, S.M.A.K., Ghent, Belgium and the Govett-Brewster Art Gallery in New Zealand. His work has been included in the Panamá, Sydney, Venice and Whitney Biennales. Durant shows with several galleries including Blum and Poe in Los Angeles, Paula Cooper Gallery in New York, Praz-Delavallade in Paris and Sadie Coles Gallery in London. His work has been extensively written about including seven monographic catalogs and books. In 2006 he compiled and edited a comprehensive monograph of Black Panther artist Emory Douglas’ work. His recent curatorial credits include Eat the Market at the Los Angeles County Museum of Art and Black Panther: the Revolutionary Art of Emory Douglas at The Museum of Contemporary Art in Los Angeles and the New Museum in New York. He has co-organized numerous group shows and artists benefits and is a co-founder of Transforma, a cultural rebuilding collective project that began in New Orleans. He was a finalist for the 2008 Hugo Boss Prize and has received a United States Artists Broad Fellowship and a City of Los Angeles Individual Artist Grant. His work can be found in many public collections including The Art Gallery of Western Australia in Perth, Tate Modern in London, Project Row Houses in Houston and the Museum of Modern Art in New York. Durant teaches art at the California Institute of the Arts in Valencia, California.
.
.
.
.
.
.
.
.
.
source: byamoret

Cartographer engaged in current day charting of the overwhelming rise of imperialism, capitalism, and corporate domination, Sam Durant proves that the maps we once relied on as evidence of progress are now visual representations of thwarted corruption. The title of the show “laissez faire et laissez passer, le mode va de lui même” is borrowed from Jean Claude Marie Vincent de Gournay, a French Commerce Secretary during the 18th century who popularized the “laissez faire” mentality of the free market. A series of six large scale globes, supported by cables extending from the ceiling and the floor, create the illusion that the fabricated globes are levitating and thus enacting the title of the show, “Let do and let pass, the world goes on by itself.” From a distance the globes seem a common artifact found in classrooms and libraries, but upon closer inspection the viewer stumbles upon statistics that Durant has infused across the representations of various nations. “Fortune 500” reflects the world as home to giant corporations, which transforms countries into ephemeral commodities. Overwhelmed by Pepsi Co., Pfizer Inc., Bank of America, Goldman Sachs, Exxon Mobile Corporation, Lockheed Martin and a slew of others, Durant seems to suggest that as the world “has gone on by itself” it has become overwhelmed by grandiose imperialist prospects infused by the profit motive. One globe charts the “top ten places for tax evasion and money laundering,” while another compares the top ten countries famous for their prisons and art auction houses. The juxtaposition of art and crime runs though the entire exhibition, as the artist’s medium is the hand the renders humanity into a state of affairs marked by corruption. The “Mirrorplanisphere” is a twenty-four foot long metal floor map cut to the shape of an orange peel, the blotches of shifting color representing nations. While Durant invites the viewer to stand on top of the sheet, which literally reflects their position on the map and thus their place in the world, the piece feels foreboding. The forms collide together and appear like PANGEA, the world’s enormous single land mass dating to the Paleozois and Mesozoic era around 250 million years ago before continental drift began. “Mirrorplanisphere” envisions that the expansion of the universe is coming to an end; now it must contract in order to start anew.
.
.
.
.
.
.
.
source: artspycn