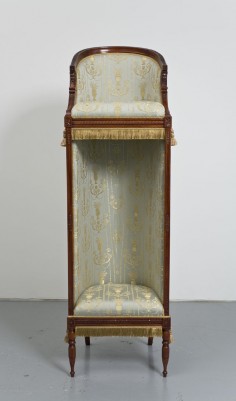 Yannick Pouliot started out experimenting with various media including photography, video and sound, then gained a reputation for his spectacular pieces, steeped in sensibility and poetry, that incorporate decorative elements, furniture and architecture, put to new use.

The exhibition showcases a series of ten serigraphs, a group of three sculptures — Empire: possessif, Eastlake: intransigeant, and Régence monomaniaque, from 2007 — and a major architectural installation, Louis XVI: indifférent, 2008. In these works, Pouliot continues to explore anthropomorphic domestic forms through pieces inspired by 18th and 19th-century furniture. As curator Mark Lanctôt explains, “The isolation (or alienation) of contemporary society is echoed in disjointed, numbing settings and in furniture closed in on itself, precluding any possibility of normal use, and afflicted with excrescences, forced linkages and disarticulations.” Pouliot urges us to take a look at our society and its decadence, while leading us through a spellbinding visual, emotional and kinesthetic experience.

Born in Sainte-Justine-de-Newton, Québec, in 1978, Yannick Pouliot lives and works in Saint-Casimir-de-Portneuf. After studies in horticulture (in Saint-Hyacinthe), he originally planned to go into small-scale farming before finally opting for a career in art. He has a BFA from Université Laval, as well as training in carpentry. His contribution to the 2003 Manif d’art 2 event in Québec City launched him onto the art scene and introduced him to the public, which took to his work right away. The next year, he was invited to participate in Artefact, 2004, and was given the stamp of approval by major museums. His work Le Courtisan was purchased by the Musée national des beaux-arts du Québec and he was invited by the Musée d’art contemporain to take part in the exhibition L’Envers des apparences in 2005. He also earned critical acclaim: voted one of the year’s top picks by the newspaper La Presse in 2004, featured in the 2005 year-end roundups in the weeklies Voir and Ici, singled out for 2003 “work of the year” in the twentieth-anniversary edition of Espace sculpture magazine, rated a 2008 visual arts “Noisemaker” by Hour and a “sure thing” for winter 2008 by Voir, and profiled in the February 2008 edition of L’Actualité magazine.
.
.
.
.
.
.
.
source: akimboca

The beauty in Pouliot’s work is uncontestable – his aesthetic of elegance indulges in silken hues of pink and camel, with lots of incredibly detailed woodwork. In addition to a massive maze-like installation (which is guaranteed to be a sight for sore eyes as well as a bit of a mind bender), the exhibition will feature a dozen drawings and three pieces of finagled furniture, Pouliot’s specialty: a double-decker Empire chair wittily titled Empire: Possessif, a four-Regency chair assemblage united by a single cylindrical backing titled Régence: Monomaniaque, and an East Lake construction that is the most extreme in its obvious un-usability. About twelve feet in diameter, it’s a kind of stuffed-silk kiddy pool, surrounded by an impossibly intricate carved wood backing that took Pouliot and his father – a cabinetmaker – 450 hours to sculpt.