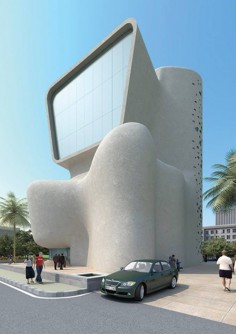 sanjay puri architects have designed ‘bombay arts society’ as a mixed-use building on a 1,300 square meter plot. half the complex’s programs is composed of office spaces, while the other half caters to visual and performance arts displays and creative studio space. three lower levels encased in an undulating concrete form house galleries and their allied functions, the seamless transitions between vertical and horizontal surfaces continuing inside the building as well as on the exterior. thus, patrons tour the museum, moving fluidly through an occupiable sculpture. slightly detached from the public realm below, a four-storey volume contains the arts society’s administrative offices. a separate entrance leads up to this area, physically separating the programmatic zones. the two distinct set of spaces are united in their materiality with gentle curving tectonics. in contrast to the subtle openings below, the upper mass is punctuated with a large glass facade that is angled to frame views of the sea.
.
.
.
.
.
.
.
source: worldbuildingsdirectory

Project Description – Fluid forms enmeshed together in parts emerging from each other in parts constitute this small building.

Within an extremely small plot measuring only 1300 sq. mts, a mixed use building programme based on the clients needs had to be adhered to.

Art gallery spaces, an auditorium, a cafeteria and artists rooms had to be planned within 1000 sq. mt and another 1000 sq.mt of office spaces were to be provided for, each with separate entrances.

Fluid spaces across the three lower levels house the art gallery spaces and their allied functions with walls flowing into roofs homogenously. The fluidity of form seen externally, with a concrete skin encapsulating spaces while undulating in both the horizontal and vertical planes, is carried through to the interior volumes making the entire experience as that of moving through a sculpture.

A separate entrance lobby at the rear corner leads one up vertically into a four level office space that is angled to allow the offices unrestricted views of the ocean in the distance.

The office spaces are encapsulated in a concrete skin punctuated volume with floor to ceiling glass panels in the direction of the sea.

Thus within this small 1300 sq.mt plot two distinct set of spaces are created each with its own discernible identity and yet enmeshed together to create a uniquely sculptural building.
.
.
.
.
.
.
.
source: architectorua