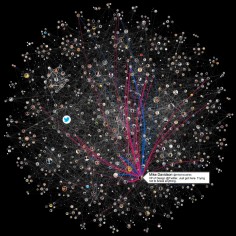 Santiago Ortiz has lived around the world doing what he loves best – designing information visualizations – and building an impressive profile along the way. For starters, he has taught classes in arts, mathematics, technology, and design at universities in Portugal, Colombia, and Madrid. He collects and displays his research, digital works, and work with clients on his website moebio. Recently, Ortiz had the pleasure of speaking at the San Francisco Bay Visualization Conference alongside Eric Rodenbeck, the CEO and founder of Stamen. Together, their main message was that information visualization is something that is…

just starting, something new and with a huge potential for the future, and the main issues in information visualization are far beyond the technologies we are using right now because it’s a more conceptual and cognitive problem. It was through this presentation that Ortiz stressed his take-away message: “It’s not flying, it’s failing with style.” He described different projects he’d completed along the path of his career that turned out interesting and aesthetically pleasing, but that overall, didn’t convey the information it was set out to. “They all had a lot of success, but they didn’t really answer the important questions.”

Here, you can see an example of one of his most successful projects that answers these questions. Called Newk, this network visualization tracks and displays one week of conversations among employees at Twitter. The visualization is interactive so that viewers may click, drag, and zoom nodes to see which users connect with each other most often and to view individual pictures and bylines.

Aside from his experience in education, the origins of his work began in Spain, where he co-founded a company called Bestiario that he says was probably the first ever interactive information visualization company in Europe. He left the company less than a year ago and continues to work in information visualization as a freelancer for clients based around the world. He says that his home in Argentina offers a fantastic quality of life that is hard to beat, and that it’s easier for him to work in an isolated place. He most enjoys freelancing because it allows him to work on several projects at once while balancing his client-based and research-based schedules.

I think that the freelancing panorama has changed a lot in the last few years. Nowadays, one single person can actually do the job of a company because… [they] can access a wide range of tools that are free, easy to learn, work very well, tools that in the past were only accessed by very specific and specialized people.
In addition to these tools, the connections that freelancers make among themselves creates a support group around the world that combines different knowledge and skill-sets. Of this idea, Ortiz says: “I want to do the work of a company – it’s a fantastic challenge.”

The biggest surprise that Ortiz experiences when working with clients are those who are looking for creative communication strategies to support a product, but they don’t even have enough data to begin with or know what types of information they will need for such a project. The biggest effort is then in the first few stages; and this is where Ortiz first helps with the process of gathering, organizing, and eventually analyzing this data.

In this world, a lot of people are saying that the problem is that we’re overwhelmed by data, [but] there are a lot of organizations that do not have the data. They have the means to gather it but they don’t.
.
.
.
.
.
.
source: rhizome

Santiago Ortiz (Bogotá, Colombia, 1975) studied Mathematics at the Universidad de los Andes in Bogotá, Colombia; he also studied music and literature. He has taught at the School of Fine Arts at the University of Porto in Portugal, and at the Departments of Arts and Mathematics of the Universidad de los Andes in Bogotá. He has been a Professor of the Masters in Art and Technology at the European University of Madrid, and he teaches classes in Digital Design at the European Institute of Design in Madrid, among others. He is co-founder of the magazine for digital art and culture Blank, and a constant collaborator of the MedialabMadrid.

His works are related with the intersections between art and science, artificial life, languages and narrative, information spaces and education. He publishes digital works, information about exhibnitions and texts in moebio.com.