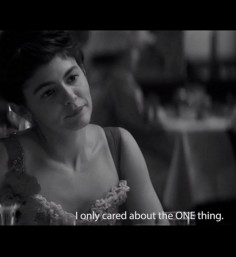 Femme Chanel – Emma Fenchel
This work combines a Chanel commercial with various scenes from films starring Audrey Taotuo. The switching between black-and-white and color, the musical transition and the overall rhythm of the editing is formed to an homogenous video.

My name is Sarah Oos and I was born in 1994 in Wels, I graduated from High School for Artistic Design 2014; in October I started studying graphic and photography at the Art University Linz. I discovered my passion for video-making and graphic design over the course of various internships, including one at the YOUKI International Youth Media Festival.
.
.
.
.
.
.
.
source: flickr

In order to manipulate on yet another level, I decided to employ only the original French soundtrack. Dialog between Emma and her lovers is made understandable to German-speaking viewers by means of subtitles, whereby there’s absolutely no connection between the spoken French and the written German.” This playful approach to cinematic reality already began with Sarah Oos’ naming of her chief protagonist: “Emma Fenchel is an anagram of Femme Chanel.”
.
.
.
.
.
.
.
source: fileorgbr

Abstract:
This work combines a Chanel commercial with various scenes from films starring Audrey Tautuo. The transition between black-and-white and color, the musical variation and the overall rhythm of the editing grant the clip a very distinctive atmosphere.
.
.
.
.
.
.
.
source: fileorgbr