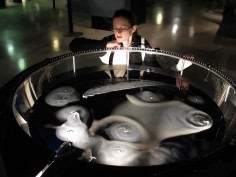 “Kant writes of objects that can create fearfulness and awe in their spectators without any sense that we are personally at risk. For all the modesty of its scale, there is something of that in Icy Bodies. You can lean on the case that contains it – but you look through the glass into a universe.”
— Thomas Sutcliffe, The Independent, UK
Created in 2001, Icy Bodies has been installed in over a dozen national and international museums. “The pale, ghostly swirls on the dark water,” described the London Telegraph newspaper, “have a beauty that belongs as much in an art gallery as it does here, in a science museum.” Reminiscent of comets, the ice shards sublimate small amounts of carbon dioxide that propel the spinning shards in unexpected directions. The resulting patterns are mesmerizing and unique to each cycle.

Icy Bodies is created at two scales, standard and iconic. The larger version accommodates up to eight viewers, the standard version may be viewed by up to four to five visitors.

Both sizes require approximately 4 lbs. of dry ice per day. Ice must be supplied in pellet form and requires approximately 10 minutes a day to process the ice. Ice crusher and sieve are included. The exhibit lasts up to 10 hours per load.

The artwork has the following features:

“This website features a number of projects that I’ve pursued over the last twenty years. Some of these projects were commissioned as artworks, others were collaborations with colleagues working on museum projects or public space installations.

I currently work as the Founding Director of the Exploratorium’s Studio for Public Spaces, an initiative dedicated to introducing informal, inquiry-based learning into the public realm.

Working closely with city agencies and community groups, we create public spaces that enable a formative culture, where new ideas, strategies, and visions emerge from the people that flow through them.

My personal works are profoundly influenced by the vast landscapes of Eastern Nevada where I maintain a studio, a 1928 movie theater, and a plot of land fertile with pinion pine and dreams.”
— Shawn Lani
.
.
.
.
.
.
.
source: exploratoriumedu

Shawn Lani is a senior artist and curator of the Exploratorium’s Outdoor Gallery and other outdoor works. His Outdoor team is creating more than twenty-five site-specific installations and commissioning a wide range of artists to help enrich and enliven the museum’s new home at Pier 15. In addition to their work at the piers, the Outdoor team is actively developing and installing public works throughout the Bay Area. As principal investigator for the NSF-funded project Ciencia Publica, Shawn is leading the development of portable and public interactions in predominantly Latino neighborhoods, working in partnership with San Francisco city planners and advocates for urban improvements. Shawn has also created pieces for the NSF-funded Outdoor Exploratorium: Experiments in Noticing. The project team installed twenty outdoor pieces at Fort Mason, a unique urban national park in San Francisco. In addition, as a member of the NOAA/Exploratorium Vision Council, Shawn advocates for artworks that create intimate experiences with broad implications.

An active public artist, Shawn has participated in a number of national and international artist-in-residencies. His creations are installed in more than fifty museums worldwide, and he is the recipient of a National American Institute of Architects award for the monumental LIGO Wind Wall installation in Livingston, Louisiana.

Shawn has a BA in English/Creative Writing & Art History from the University of California at Davis, and an MA in Museum Studies (Design and Education) from John F. Kennedy University.
.
.
.
.
.
.
.
source: tinkeringexploratoriumedu

Shawn Lani is a senior artist at the Exploratorium. Most recently, Shawn worked as lead developer for the Outdoor Exploratorium, a series of interactive exhibits at San Francisco’s Ft. Mason designed to help visitors explore the subtle phenomena of the everyday world and the complex systems at play in outdoor environments.

His work can be summarized as a collection of curios created as accessible objects of wonder; mysterious yet navigable. Ideally, interacting with them leads to the type of investigations common to both scientists and artists: noticing details, asking questions, and exploring phenomena.

Shawn is also an accomplished regional artist with large-scale water sculptures in downtown San Francisco and pieces on permanent display in over forty national and international venues. He received a design award from the New Orleans chapter of the American Institute of Architects for his work with fellow Exploratorium artists on a monumental kinetic building facade.

In the Tinkering Studio, he installed beautiful strobing flowers made of plastic bags.