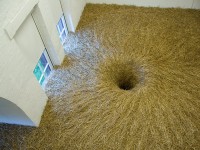 Shea Hembrey was born in 1974. He grew up on a dirt road in rural Hickory Grove, Arkansas in a family of farmers, factory workers, hunters, trappers, musicians, and cockfighters.
He makes art by concentrating on a singular, defined conceptual project where the ideas direct what methods and media he uses. Research is key to all of his creative endeavors while he remains a prolific maker of things.
Though always focused on developing skills on his own, he has a varied formal art education. His nine years of studying art at university include a year spent studying Maori art in New Zealand and an MFA from Cornell University.
His studio is currently based in a sleepy town on the Delaware River in New Jersey.
.
.
.
.
.
.
.
source: nytimes

Shea Hembrey is 100 artists in one. At TED2011, he shared how he staged an international biennial containing works from 100 artists … all of whom he invented himself.
The talk has spun into his first New York gallery exhibit, featuring work he made—this time as himself. The exhibit is called “Dark Matters,” and it’s on view at the Bryce Wolkowitz Gallery through October 20.
“When I spoke at TED in Long Beach in 2011, Gary and Sarah Wolkowitz were in the audience and their son, Bryce, now represents my work,” Hembrey tells the TED Blog.
The exhibit focuses on his fascination for the past 20 years: dark matter.
“For nearly two decades, I have continually pondered dark matter and dark energy—which together account for over 95% of the cosmos,” Hembrey says in the gallery materials. “The question of these mysteries has repeatedly surfaced in my imagery over the years.”
After the jump, watch Shea’s wonderful TEDTalk and see some of the pieces from his new show.