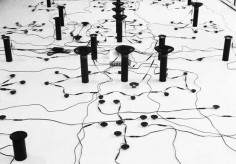 “Sonicity: Sonicity: Songs Of Atoms Time And Space” is a responsive installation, a sonification of the real space and environment. The sounds you hear are the sounds of the changing environment, ie the changes of noise, light, temperature of the space is turned into a real time sound stream using dozens of wireless sensors presented as an installation on 170 speakers. This artwork focuses on the real time space and the experience of the gallery visitor as they interact with the space, using data gathered from these new technologies.

The sensor system monitors the space (the building) or the environment (the city) and captures live real time data (light , temperature, noise, humidity, GPS position) to create an ambient sonification, an acoustic responsive environment, literally the sound of the micro incidents of change that occur over time. This artwork explores new ways of thinking about interaction within public space and how this affects the socialization of space. The project uses environmental monitoring technologies and security based technologies, to question audiences experiences of the event and space and gather data inside the space. The project also focuses on the micro-incidents of change, the vibrations and sounds of the gallery using wireless sensor based technologies.

The Installation Experience. Data as sound. Space as Sound. Gallery as Sound.

The patterns, movement, and exchanges of data in the real space, are measured and interpreted as an emergent social space and used to make this artwork; in this case a sonification of the space. This data is processed and turned into sound. There are 170 speakers laid out across the floor like city which you can walk around. This is essentially what is seen in the gallery. A city of wires and speakers across the floor or on the wall. Sonicity plays live data….ie, live data from wireless networks are used to make sonifications of real time spaces. The interactions of all this data are re-formed and re-contextualised in real time as a audio experiences. Hundreds of small speakers are wired together and the artwork is made across the available space. Sensor motes are used to collect the data. The wireless sensors gather data and communicate to the central server. The real world is monitored and the data stored in my archive retrieval system.They sense the micro incidents of change in the light, the noise, temperature, sounds of the flows inside the space.

I have developed the sensor software and sensor hardware to make the installation. The sensors placed either at the location / gallery / space/ or another location or city and accesses remotely.

The sonification software has been re-written and version II includes atonal note customisation with harmonic variation for the whole system. It features mixing consoles for each independent environmental data set all working in real time and a record feature. Additional mixers in the software also allow all the sensors to be mixed and cross mediated enabling on to compose music based on the space.The software enables light, temp, noise, humity, GPS to all be mixed separately across the whole system if required. In summary the XML live feeds ( the incoming data) is turned in music.

Also developed is the online custom built software software to collect environmental data from the sensors allowing the data to be ported over networks to the sonicity software. This Moteproxy software is a java middle-ware environment for connecting up xbow motes allowing access to the data outside and directly off the motes. It is now in version two and sits on its own server. It allows access to the two networks of twenty motes in real time from which PHP and XML pages are served up. Moteproxy allows real time polling of data online from any sensors network that is connected and switched on, the data is then formatting in PHP and XML to enable anyone to make a visualization or interpretation of the data with it. The changing data is what affects what you see and experience. The sensors monitor temperature, sounds, noise, light, vibration, humidity, and gps.

Stanza has developed a 40 mote multi sensor network that is used in this artwork and be scattered thought the the location . The nodes can be placed up to 10 -300 meters apart over the space. Once switched on they gather the data.

Speakers and amp. Over 170 speakers, custom made amp and cables and are used to make the installation.
I now have another sensor kit with twenty nodes that can be placed up to 300 meters apart with GPS.
I have made two versions of the Sensity interface software.
One works with recorded data (ie, a sampled junk of time) and one that works with the real time data (ie ever present always changing), which means the sensors are switched on always and working through a router. This uses custom written java based mote proxy software now in version 1.6.
NOTE: The changing data is what affects what you see and experience. The flash interfaces reflecting these real time changes in the interactive city space.
Live XML feeds form real time sensors when switched on. This is open source so other academics, urban designers, researchers as well as artists can make use of the data.
The sensors can monitor temperature, sounds, noise, light, vibration, humidity, and gps.
The sensor network takes a constant stream of data which is published onto an online environment where each different interface makes representations of the XML
From this lots of artistic interpretations can be imagined and made these above example are some in this series.
The way Sensity is exhibited can be scaled up and this depends on your budget. I now have several version of this artwork, please contact me for full details on how this can be exhibited and experienced.
A. A local version this can be made and then projected and also shown online. I have already made versions for several cities. In this case I test and deploy my sensors and make the visualization. B. Making it real time so sensor data isn’t recorded but real time. This involves set up of technology, adding some code to router, using my sensors, using my computers, set up of the sensors in the correct location, programming them, replacing batteries and care for the duration of the show and insurance. In this case I test and deploy my sensors and make the visualisation and leave the sensors and the computers running all the time. C. How it looks in the gallery or the actual displays ie, what it is seen by the audience. It can be experienced on plasma screens, projected or shown on 3d globes. Once the visualisation is made there are a numbers of ways to present it. Contact me for pricing.
Sensity artworks are made from the data that is collected across the city. The sensors interpret the micro-data of the interactive city or responding city space. The outputs from the sensors networks then display the “emotional” state of the city online, in real time. The information is also used to create offline installations and sculptural artworks. Several artworks (sonfications and visualisations) have been made connecting up space and cities.
All t he artworks in this series by Stanza use data from the real time environment. A new city experience results based on the mash up meta data from these multiple cities streams. Sensity leverages these real time data city streams and represents it online, showing the life of the system, opening up the system, and the publishing emerging changing bahaviours of the space.
As all things becomes connected and networked, my concept will be become a system that senses not just the city but the whole world. Eventually sensors will be linked to give a real time global visualization. ~ Public domain data resource for art and environmental monitoring.
The sensor networks can be moved from urban to rural setting, ( ie they are mobile) and different types of visualization can be made depending on the environment. Sensity is an open social sculpture that informs the world and creates new meaningful experiences. Sensity is also a highly technical project that gives vast amounts of information about the fabric of our cities. By embedding the sensors like this we can re-engage with the urban fabric and enable new artistic metaphors within city space. The sensors are positioned across the city. These artwork in the sensity series represent the movement of people, pollution in the air, the vibrations and sounds of buildings. They are in effect emergent social sculptures visualizing the emotional state of the city. Sensity incorporates the holistic city system. The sense city is a city full of accumulated incidents; of love, abuse and death, fundamentally of change. The micro incidents of change in the weather, the noise traffic flows and people flows are all potential sources for inquiry. Custom made software now enables these sensors to communicate will one another in a network over a proxy server in real time. Control to the hardware is opened up. The data is also used to create visualizations in an open source environment. Other online users can also re- interpret the data and interrogate the various sensors in the network as this is open source as well (see xml streams). Representations of these data sets will allow unique understanding of the urban environment and environment in real time. Motes are used to collect the data. The ‘motes’ are tiny wireless sensor boards that gather data and communicate to the central server. The real world is monitored and the data stored in my archive retrieval system. Motes and sensor boards sense the micro incidents of change in the weather, the noise traffic flows and people flows. The interactions of all this data, controlled via bespoke interfaces re-form and re-contextualise experiences in real time.