Capacities Life in the Emergent City 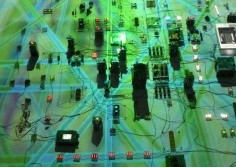 “Capacities Life In The Emergent City” captures the changes over time in the environment (city) and represents the changing life and complexity of space as an emergent artwork. Capacities goes beyond simple single user interaction to monitor and survey in real time the whole city and entirely represent the complexities of the real time city as a shifting morphing and complex system. What you see is a sculpture which represents the emergent properties of the environment where the sensor network is situated.

The artwork called Capacities is installed.The gallery space becomes a live emergent sculpture to wander through. The changing life in the real time city creates all the changes one experiences in the gallery space. The leads, the wires,and cables are incorporated into the artwork to look like a city map.’ Capacities’ looks “designed” like a piece of urban design, a city surveyed and controlled. The whole gallery space becomes one large artwork made from real time city information and data. The moving objects, fans, changing lights, motors, noises, that you encounter in the gallery are all responding to changes in temperature, light, pressure, noise, and the sound of the city outside. The aesthetic and feel of the space looks like an electronic city. The city is made of units, grids, repetition, building blocks.

The artwork is a responsive installation with embedded interactive elements. It is responsive to the live environment via sensors and interactive with its embedded CCTV systems. The artwork gathers data from the city (environment) via a custom made wireless sensor network. This is then represented virtually and then this virtual city is represented as this artwork installation. The work becomes a manipulation of data, that ‘powers’ all the ‘events’ ‘actions’ and ‘processes’ in the installation.

The art of gathering environmental data. This project leverages the real time space using data gathered using new sensor technologies and connecting spaces. The artwork explores new ways of thinking about life, emergence and interaction within public space and how this affects the socialization of space. The project uses environmental monitoring technologies and security based technologies, to question audiences experiences of real time events and create visualizations of life as it unfolds. The interactions of all this data are re-formed and re-contextualised in real time artwork.

We understand the 20thc in terms of atoms, molecules and gases that move. Our world is now a world of numbers and changing data and information. This art installation manipulates these numbers and the data from the living real world; all of this affects the installation ie the artwork in the gallery space and all the changes occur in real time. The real world is made virtual and the virtual is made real again and exposed in the process. This whole piece is a living and breathing artwork. The project focuses on the micro-incidents of change, the vibrations and sounds of the environment using wireless sensor based technologies.

The artwork is a responsive installation with embedded interactive elements. It is responsive to the environment via sensors and interactive with its embedded CCTV system. The central piece “Capacities” in the gallery becomes a series of responsive events triggered by live events ie the emergent data sets. The installation responds to changes in the life of the city as it unfolds in real time. On the floor there are hundreds electronic components: (Fans, Lead, Soleniods, Motors). The fans turn when the temperature changes, motors turn when the light changes. Technically these move in response to the wireless sensors networks I have deployed in the gallery and across the environment and these are monitoring the light, temperature, noise, humidity of the space and the city. As this data changes this wired artwork city changes. Inside the work are CCTV cameras that present feeds onto micro monitors in the work.

For the past ten years I have been researching wireless sensor networks. I have developed the software and I can place sensor hardware to make these installations. This is the physical entity that one can see and hear to experience the real time and passage of time.

I use 40 motes sensors in a network. (this is technology I already have developed). This is tested, and I have custom built software that gathers data and places the data online via a java proxy server. This then allows me to make artworks with the data. The data include GPS positions, humidity, noise, temperature, light, of the space and the surrounding environment. The interactions of all this data, controlled via interfaces that can re-form and re-contextualise experiences in real time. Representations of these data sets allow unique understanding of the gallery and the urban environment in real time.

The data is also used to create the visualizations in an open source environment. Because the data is networked other online users can also re- interpret the data and interrogate the various sensors in the network as this is open source as well (via xml streams online). The sensor network takes a constant stream of data which is published onto an online environment where each different interface makes representations of the XML and this is used to make an offline and one line artwork. I have tested the sensors, I have written custom software and the main boards are built. The sensors monitor temperature, sounds, noise, light, vibration, humidity, and GPS.

I have 40 motes multi sensor network that are scattered thought the the building and across the city or location space. The nodes can be placed up to 50 -300 meters apart over the space. I am an expert in wireless sensor technologies as a result of my AHRC creative fellowship. Once switched on they gather the data. I have made two versions of the interface software and custom built software for real time data over networks. Mote proxy is a java middle-ware environment for connecting up xbow motes to get access to the data outside moteview and directly off the motes. It is now in version two and sits on our servers. It allows access to two networks of twenty motes in real time from which php and xml pages are served up. Mote proxy version two, and allows real time polling of data online from any sensors network that is connected and switched on, the data is then formatting in PHP and XML to enable anyone to make a visualization or interpretation of the data with it. The changing data is what affects what you see and experience. Live XML feeds form real time sensors when switched on. The sensors monitor temperature, sounds, noise, light, vibration, humidity, and gps.

The sensor network takes a constant stream of data which is published onto an online environment where each different interface makes representations of the XML.